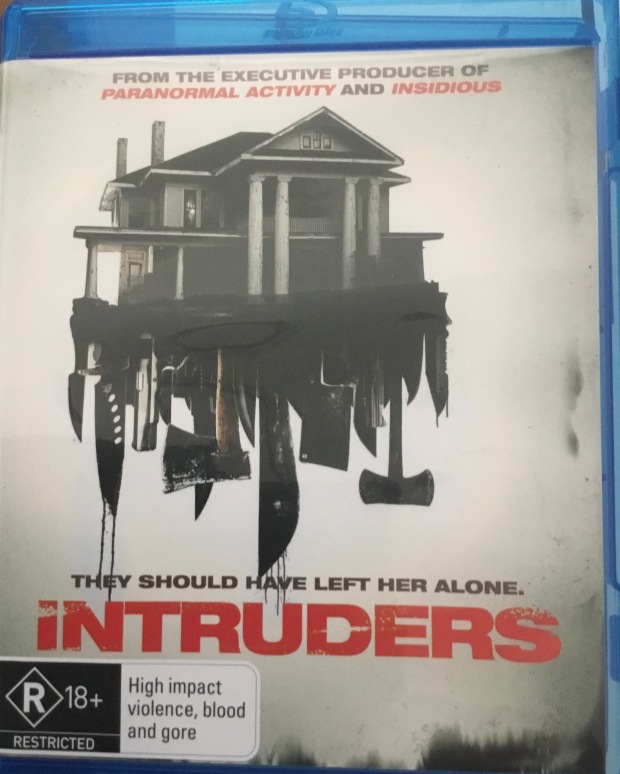 Film: Today is the day that I have to admit to the crime that separates a movie connoisseur from a horror movie hoarder. The thing that separates the highbrow champagne film critic from the lowbrow, beer skulling scumbag who is looking for the next film that he can cringe at whilst someone cops a claw hammer to the head.

Occasionally, I buy movies based on the picture on the cover. Even worse, this cover wasn’t a cool Roger Corman 80s schlock flick… It’s a modern, post-millennium, photoshopped cover.

Yes, I am hanging my head in shame.

I found this cover evocative though, and in my defence, like most ‘good’ items used to promote a film, it has very little to do with the story.

This film is the first feature film for director Adam Schindler, who is previously known for writing the 2013 horror film Delivery, and is written by T.J. Cimfel and David White, who previously worked together on V/H/S/ Viral.

This film is also known by the far better title ‘Shut In’ which certainly is more in tune with the story rather than the less interesting, and easily confused with the Clive Owen pic ‘Intruders’. I just don’t get why movies with good names get them changed when released in different countries/ regions. 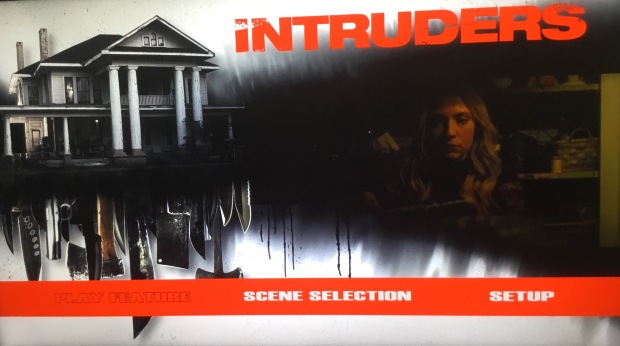 Intruders tells the story of Anna Rook (Beth Reisgraf), an agoraphobic who has been taking care of her sick brother, Conrad (Timothy T. McKinney), who is suffering with pancreatic cancer. Her only real contact with the outside world are their lawyer, Charlotte (Leticia Jimenez) and a homecare meal delivery man, Dan (Rory Culkan).

Tragically, her brother dies and due to her psychological disorder, she is unable to attend his funeral, and she hides inside from the outside world. Unfortunately for Rose, staying at home on a day she was supposed to be out was plain old bad luck, as a gang of three decide to rob the house as they have heard of money hidden within.

What these intruders don’t realise is that Anna and her brother have a secret that they keep in the basement, and for their own good, it would be better if they stayed out…

Essentially the film is a combination of seventies home invasion films with Home Alone, but in this film, Kevin McAllister is replaced with a sexy, blonde female 20-something year old, and maybe, if I were the type to be a spoilerer, I’d suggest their to be just a drop of Saw.

I really liked this movie, and considering I knew nothing about it, was very pleasantly surprised. The intruders were great in their different levels of menace, though they may have watched Panic Room for inspiration, and Reisgraf’s performance remained delicate as her character reacted to misfortunes placed in her lap, even when it caused her to become aggressive

Rory Culkan, on the other hand was the unfortunate exception. He plays his role like an actor playing an unpleasant, sarcastic nerd from an 80s teen comedy, but who has the memory of a goldfish and has to read his lines off a large piece of cardboard held up by an assistant director. I’d say this is an example of nepotism running rife in Hollywood, but how much pull older brother McCauley Culkan has I imagine would be dubious.

One other thing I definitely must point out with this film is that their are several elements within the house that require fairly large leaps of faith to believe that just two people could have set up. It’s difficult to properly explain exactly what I mean here without spoiling massive elements of the film, and I don’t wish to do that, but basically if you can believe the one-man-show aspects of some horrors and thriller antagonists, you should be OK.
I really liked this modern take on the 70s styled home invasion film, with the agoraphobic element thrown in as the first of a couple of twists… Not M. Night Shyamalan styled story-altering twists, just little tweaks. The quiet elements are balanced nicely with with the acts of violence, and fans of budgerigars be warned: this film contains scenes that may cause you to sit in your aviary and rock backwards and forwards for a few hours.
Score: ****

Format: A modern film in the digital format has no excuse for being bad, and this film looks great! The version watched was the Australian region B bluray which runs for 90 minutes and is presented in 2.40:1 letterbox and has a perfect DTS HD 5.1 audio track.

WISIA: I don’t think Intruders is going to make its way to the rewatch pile, even though it was a pretty good movie. Like a magician teaching others his tricks, once you know the secret, the interest diminishes. I will add that some of the dialogue between Anna and Conrad has a different meaning once you have seen the film, so it’s possibly worth one do over just for that.