Occasionally the To Watch Pile allows me a small freedom to go and see a film from somewhere other than in front of the old flatscreen, and today is one of those days! This review will receive an addendum in the future when the BD is released and all the extras come into play.
So here is a bonus review, one from the cinema watch pile…
Captain America: Civil War (2016)

Film: Marvel comics have certainly taken the reigns of cinema superheroes from DC over the last few years. After DC’s domination for so long, with multiple Superman and Batman films, not to mention other stuff like Watchmen, and as far as I am concerned, the underrated The Losers, Marvel pulled their socks up and have created a cinema sourced universe like that of which hasn’t been seen since the multi-monster based Universal horror movies of the old days.

Sure, the comic related stuff like Spider-Man and X-Men films have done well, but they aren’t MADE by Marvel themselves like the ‘Avengers’ related films that have been deliberately tied in since 2008’s The Incredible Hulk, (well, it was once mentioned that George Lucas’ Howard the Duck is officially part of it too… But we may ignore that even though he does appear at the end of Guardians of the Galaxy) and bravo to the collective writers, directors and actors for managing to create an essentially cohesive cinematic universe, that tells a continuing story with returning actors as regular players!

Now as a kid, Captain America was my favourite comic character, without fail. I first read his stuff with the second Marvel run that Jack Kirby did during the late 70s, which started a love of Kirby’s art as well that remains to this day (even my daughter is named after him), but when Mick Zeck took over the art and Cap’s association with SHIELD really kicked in, I was hooked, and remained that way until comic art turned to crap in the nineties when every man and his dog wanted to be either the next Todd McFarlane, Rob Liefeld or Jim Lee.

I did however return to Cap’s fold during the early part of this century, and the writer and artists of that period really got him (during the Winter Soldier storylines and thereabouts), and made the perfect stories for him, that is, James Bond stories starring a man in tights.

Captain America shouldn’t work in international cinema though. Here in Australia almost every film reviewer criticises when a film is full of too much American rah-rah, like ID4, and all those disaster films where ‘MERICA stands supreme at the end and everyone bows to the Christian/ democratic/ capitalistic way that is celebrated by what it seemingly stands for, and here is a character who is the physical embodiment of all those ideas: more truth, justice and the American Way than Superman could ever hope to represent… He’s dressed in a freaking American flag, for Clinton’s sake!

After this devastating event, UN representative, Thaddeus Ross (William Hurt) informs Tony Stark (Robert Downey Jr.) that the UN have decided that the Avengers need to register themselves and act only as emissaries of their will.

This doesn’t sit well with Captain America and he refuses to sign the document. During the UN meeting to ratify the policy, a explosion goes off killing the King of African nation Wakanda, who’s son, T’Challa (Cahdwick Boseman) swears vengeance on whomever caused the explosion, and it would appear it is Captain America’s childhood friend Bucky Barnes (Sebastian Stan) under his guise of The Winter Soldier!

Cap doesn’t believe it though and very quickly lines are drawn in the sand, and heroes pick sides to defend their beliefs. On one side, Cap’s heroes consist of The Falcon, The Winter Soldier, Scarlett Witch, Agent 13 (Emily VanCamp), Hawkeye (Jeremy Renner) and Ant-man (Paul Rudd). Stark’s side consist of Black Widow, T’Challa in his Black Panther costume, War Machine (Don Cheadle), Vision (Paul Bettany) and…. You ready for it, the new improved amazing Spider-man (Tom Holland).

Yep, you read that right…. Or saw it in the Internet like 3 months ago…

A big battle ensues, but there is a real villain behind the scenes pulling all the strings, but what are his motives?

Watch the damned movie and find out!

The movie hits all the right notes as far as popcorn action is concerned, and the effects are bang on. I must also say the production design and the costumes of the characters are awesome, and those who have make-up effects, like The Vision, are really well realised. Unfortunately all those big budget sound effects though mean the score just sat in the background as mood music and really didn’t get a proper hearing until the end credits.

Whilst I enjoyed all the superhero hullabaloo in this film, it did commit one crime that is almost unforgivable. The bad guy’s reason for all the devastation and planning and death didn’t come across as valid. I get that grief can change a person, but the lengths of effort didn’t seem to have any resonance at all, and he came across like a terribly conceived James Bond villain.

Also, the comic fan in me thinks the Captain America bad guy name they used was wasted, as that particular bad guy is just as important in Captain America comics as the Red Skull.

On the plus side, the characters who have played before by their actors are well into the roles and the fit like a bunch of great friends at the pub on a Friday night, but this doesn’t detract from actors playing newcomers either, who immediately seem to fit perfectly… though I still don’t quite think that Sebastian Stan is the greatest choice for the character of Bucky: I just feel that he and Evans have little or no chemistry for a pair of guys who were supposed to have grown up together. I get that that may be the point, but he just leaves me a little flat.

It brings me though to two problems with these movies. The problem with superhero films has always been the need for the makers to apply some fan-service within the film, be that to keep them onside or to get them to buy more toys and more t-shirts and more books.

This has that in spades, oh boy! At some point I think the makers of these films need to wind back how much they enjoy throwing extra characters in for those of us who are comic fans, and need to just concentrate on a smaller story. It worked for Ant-man, and should work for other characters they intend on introducing.

The other is the weight of the overall tale and how all the films tie in so much they are almost a 40s styled serial. My wife, who is a casual watcher of genre stuff, unless it’s disaster or alien invasion films in with case she is all-in, hadn’t watched the last three or four films in their entirety, and had to ask me several times who some of the players were. You can’t start midway in these films, no, The Avengers films require a solid investment of seeing all the films mention from the Incredible Hulk as I mentioned above. Even though Josh Trank’s Fantastic Four was miserable and far too short, at least it didn’t have to carry the trailer load of support material that goes along with these films.

Back to my wife though, the highlight for her was the appearance of Spider-man, he was definitely one of the positives for a few reasons. We didn’t have to see his origin again. Surely the four most famous origins must be, in order, Batman, Spider-man, Superman and Jesus, and doing films of any of them don’t require a revisiting of the origin. It was sure nice just to see the film say: ‘ this is a new guy playing Spider-man and a new woman (Marisa Tomei) playing Aunt May. Deal with it.’ His introduction lent itself well to the type of films these have become, and Stark’s knowledge of his existence played well to his character and his obsession with knowledge. The other was how the appearance of him, and Ant-man, brought a levity that the film desperately needed.

I must admit, and I won’t spoil it, but the appearance of one character’s new abilities made me sit up and smile so wide my ears almost fell off, and when ‘it’ happens, it’s played with so much fun that you can’t help but totally freak out over it.

Of course, don’t for get to sit through the credits for not one, but two epilogues, both of which lead themselves into future Marvel films.

I liked this film a little bit less than Captain America The Winter Soldier, which is my favourite of all the Marvel films. This film, at times, had me sitting on the edge of my seat like a kid whose been collecting comics since he was 4 years old. Sometimes, nostalgia makes me wish I could have seen these films as that kid… But that’s what nostalgia is all about, isn’t it.

Format: I saw this movie at Westfield Miranda’s Event cinemas in Cinema 1, which is one of their Vmax Cinemas. The film went for 2 hours and 27 minutes and the picture was amazing and presented in 2.35:1 and has the totally ear blitzing Dolby Atmos sound. If I am to criticise the experience though, I ordered my tickets online which cost $78, and then three drinks and a medium popcorn cost another $26.50: if I am paying over $100 Australian for three people to see a film, which I don’t mind, I do expect the cinema itself to be the height of cleanliness. We were in the second session of the day, and it wasn’t. 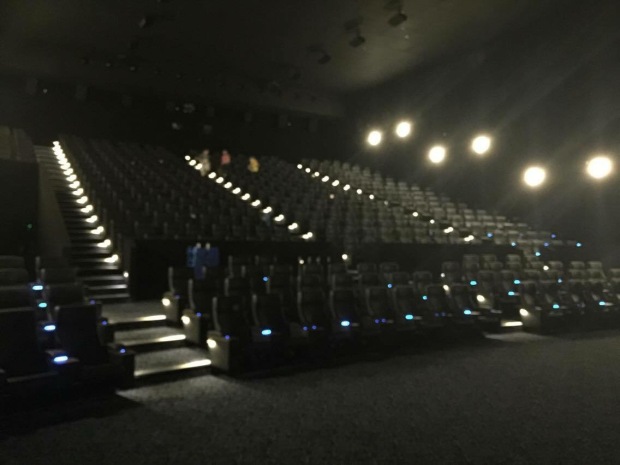 WISIA: Honestly, I just can’t wait for the bluray release so I can see it again just for the big fight scene in the middle. The comics fan in me nerd-jaculated all over the seat in front.