We made it, the final day of our ‘three colours Italian’, and what better way to celebrate then ‘red’ stripe on the Italian flag than with a favourite film of mine, Dario Argento’s Profundo Russo aka Deep Red!
One from the re watch pile…

Film: It wasn’t until Umbrella Entertainment in Australia started releasing Dario Argento’s films in the early 10s that I really started paying attention to who Dario Argento was. Sure I’d had a casual dalliance with him via Suspiria and Creepers (aka Phenomena), but my go-to guy for Italian horror was Lucio Fulci and his zombie flicks. I had, however heard and read a lot about Argento in Fangoria and was interested in seeing his work, so when Umbrella his the accelerator on things like Suspiria, Phenomena, Tenebrae, Sleepless etc I was ready to roll.

The ones that really captured my imagination though, were this film, Deep Red, and the aforementioned Tenebrae, which turned me from casual English speaking thriller fan to full tilt lover of Gialli.

This film, directed by Argento, was written by him along with Bernardino Zapponi, a writer who also worked on such legendary pieces of Italian cinema as Fellini’s Satyricon and Roma.

Deep Red tells of pianist Marcus Daly (David Hemmings) who has witnessed the murder of renowned psychic Helga Ulman (March Méril), a Oman who recently publicly outed a mystery person as a murderer. In the back of his mind, Marcus feels he has seen something important to the identity of Ulman’s killer, but can’t quite put his finger on it. He enlists the help of friend Carlo (Gabriele Lavia) and annoying, but tenaciously cute reporter Gianna (Daria Nicolodi) to dos little private investigation, but what he finds is that maybe the killer is closer than he ever suspected…

This disc has two versions of the film in the packaging, both remastered in hi definition. Disc 1 contains the director’s cut of the film which is longer and tells a more intimate version of the tale. The second version on the film on disc 2, is the shorter English version of the film. Even though each tell more or less the same story, I do prefer this one, and watch it more often than the other. Why? Well my reason is, and this is an affront to everything we as cinemaphiles think and that is, what is cut isn’t really necessary to move the story along. Sure some of it is character building stuff, but you don’t miss it in the theatrical version, and to me it tells the story more efficiently. Also, in the director’s cut, the police seem buffoonish and don’t suit the overall tone of the film.

My love of Argento films is defined by this film and two others: Suspiria and Tenebrae. As a murder mystery, it’s perfect and the violence shocking and sudden. It engages with the topic of homosexuality that films of this era rarely did without being insulting, nor with any trace of ‘whoopsie’, you know: the John Inman-ish mincing. The best thing about this film though is the staging of each scene; Argento appears to be a frustrated painter as each scene has a rhythm, and a layout that is visually striking.

A special note has to be made for the inclusion of someone whom I think is the Princess of Gialli, Nicoletta Elmi. This young redhead girl appears in many films of this era, and judging by her appearance in Demons, grew to be a beautiful lady. For my she’s like a ‘Where’s Wally? special guest star.

The soundtrack is amazing too. I’ll bring up Tenebrae here again as the Goblin score on Deep Red is second only to that one. Most modern day soundtracks seem to disappear within the background, but the score here is like a palpable character whose presence effects the viewers state of mind, like a good score should.

All in all, I love this film. It’s a great watch, a sound thriller and has an epic score. You really need to have this in your collection!

This disc has some really awesome extras across two discs, and for an Argento fan (like me) it’s quite entertaining. 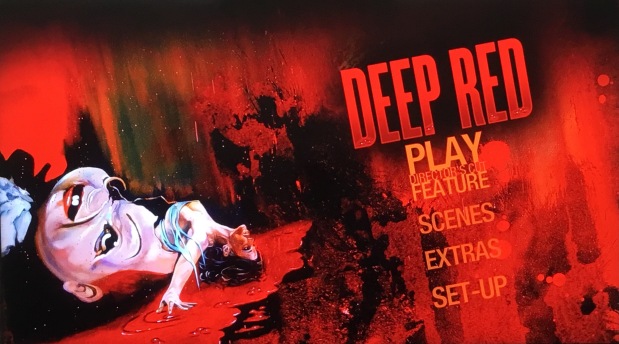 Disc 1 has both a US and Italian Trailer, Lady In Red – Daria Nicolodi Remembers Profundo Russo, Music to Murder For – Claudio Simonetti on Deep Red and Rosso Recollections – Dario Argento’s Deep Genius

Disc 2 has the documentary Rosso: From Celluloid to Shop which is basically an interview with Luigi Cozzi, director and the gentleman who runs the horror store/ museum in Rome, Profundo Rosso.

This Arrow edition also came with a choice of 4 different covers for the sleeve, a double sided poster featuring the new artwork and a booklet by Alan Jones, the author of Dario Argento – The Man, The Myth & The Magic. There is also a commentary by Argento specialist Thomas Rostock, which sounds very stilted by is quite fascinating.

For a fan of gialli and/ or Argento there is heaps to enjoy here!

WISIA: It is one of my all time favourite movies,and I probably watch it once every 6 months, so definitely!