Film: I am an unabashed fan of films, and I don’t care if they a blockbusters or trashy trash, I just love cinema. I’ve seen films with a negative budget that have entertained me to no end, and sat down to multi-million dollar, star studded efforts that have bored me to the point of attempting to swallow my own tongue just to get out of the cinema. I’ve seen Academy Award (c) winners that sucked, and Razzie recipients that didn’t.

This is the amazing tapestry of life: opinions are like arseholes, everyone’s got one and most of them stink.

The reason I find films of all levels entertaining lie in two pieces of personal necessary criteria: story, and duration. The film has to have a good story, and the effects don’t matter because whether they are seamless CGI effects or rubber costumes, I can see the story that is being conveyed. If effects were such an issue, TV shows like the Thunderbirds wouldn’t have the longevity they do. The duration and efficiency in how that story is told is also a point of contention. One of my pet peeves is the current trend of overselling a great movie with a TV series remake… I’m looking directly at you, Scream. The first film was told with an economy that the TV series unnecessarily expands upon. The point here is not whether the show is good or not, because an item of entertainment can have great acting and direction but then not deliver its tale with any sense of timing delivery.

This film, The Astro Zombies, is by legendary independent film-maker Ted V. Mikels, whose skill in filmmaking I find interesting and frustrating. Interesting insomuch as I like the themes, and story of the films he makes, but frustrating as he breaks my second rule about the pace of a film. His direction is always here and there with me as well; occasionally I find scenes that are set with such an amazing eye for a quirky angle, and then in the next second, someone spends an entire dialogue scene with their face in the shadows, but the back of their head lit perfectly.

This film tells of Dr DeMarco (John Carradine) a former scientist from the Astro Space Laboratory, who has managed to created a murderous ‘Astro-man’ from parts stolen from various dead bodies procured by his deformed assistant, Franchot (William Bagdad). Even though performed in secret, the doctor’s work has still been brought to the attention of agents from various secret services from around the world, including the villainous spy Satana (Tura Satana) and the CIA’s chief Holman (Wendell Corey).

Holman amps up his investigation though when a young lab assistant is brutally killed by one of the Astro-men, and using the latest hi-tech equipment that the CIA has, they manage to pinpoint his secret location for a final deadly showdown.

Realistically, this movie could be summed up in one sentence: Dr Frankenstein vs The Man From Uncle, and even, in the credits, uses some of the fonts from TV shows like The Brady Bunch, and scene changes that kinda-sorta feel a bit Batman (the 60s TV show) in style.

The basic for the story is quite entertaining, though I am mystified as to how Umbrella managed to be stuck with an R rating. There is really nothing here that is SO offensive to require that. I almost wonder if they have just thrown on a rating from several years ago just to not have to pay to have it resubmitted, especially as seeing as how it is at such a low price in Australia (this copy was bought from JB Hifi in Sydney NSW at a just sub $7 price point). I don’t see how this could be under the same category as Cannibal Holocaust and Salo!

The real joy from this film comes from the appearance of iconic Russ Meyer star Tura Satana, chewing up every line she gets and showing her disdain for every man she comes across that doesn’t bow to her will, and John Carradine, a cinema legend who is known just as much for the absolute crap he ended up in as much as he is known for his quality cinema. The appearance of these two though, doesn’t mean the film is a must-see gem unfortunately.

I think perhaps Mikels at this stage in his career didn’t quite understand, or chose to ignore, and I mentioned this earlier, that cinema has a language where every single step of a procedure doesn’t need to be shown. At one point Carradine goes through this long winded process with a computer chip that brings the film down to almost a complete halt. I’m amazed I stayed awake!

The film is entertaining, though has several of these moments that bog it down. It’s hardly one I’d suggest to most of my film friends, but the trash fans will get up for it… And it’s got Tura Satana in it, surely that at least worth one watch!

Format: This Australian region free DVD release from Umbrella Entertainment is presented in a very artefact-filled, telecine wobbling 1.77:1 image with a mono English soundtrack. It’s still watchable, but it is far from a perfect image. 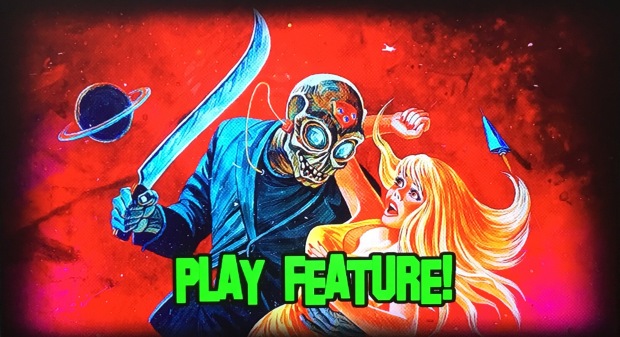 Extras: Not a sausage. Not a single thing. Zip. Zilch. I do have to compliment the awesome cover though, but it doesn’t get a score as an extra just for having that.

WISIA: It’s far from a great film and honestly I found it at times somewhat of a trial, but the appearances of Tura Satana and John Carradine possibly could cause it to be spun more than once.