Film: I got my first X-men comic in 1983. I remember it clearly as I received, like I did every Sunday, two comics when I went with my step-dad to the newsagency to get the Sunday paper. It must have been May or June in that year, and I remember it clearly as I got New Mutants issue 1 and The Uncanny X-men issue 167 and this started a decade long love of the mutant characters until the early nineties when Marvel decided that after being innovators of comics for so long, they now had to copy the ultra-violent stupidity of the first generation of Image comics after those artists and writers jumped ship.

Thankfully Marvel eventually mostly abandoned these imitations and went back to what they do best: solid stories with great art and innovation (though recently best Marvel and DC seem to have lost their ways again, what with Marvel re-living past glories with new versions of Secret Wars and Civil War, and DC with their constant 5 years cycle of rebooting their entire universe).

Aside from all that I do have to admit to loving most of the X-men films. I loved the first two, thought the first was overblown and overdone, then loved the First Class and Days of Future Past films, but how do I feel about X-men Apocalypse? I must prologue this review but pointing out I was never a fan of the character of Apocalypse…

Which leads us to the plot synopsis for X-Men Apocalypse.

We start in ancient Egypt, where En Sabah Nur (Oscar Isaac), an ancient mutant, is engaging in a body transference to extend his life when two traitorous members of his group cause the temple he is in to collapse around him. En Sabah Nur absorbs the strength and powers of any mutants he body transfers into, and has with his four henchmen, ‘horsemen’ if you will, to help him on his quest for power. All of whom are destroyed by the collapsing temple.

Several centuries later, another group resurrect him and he sees this new world of 1983 to be full of power that he can tap into…

Meanwhile, Professor Xavier (James McAvoy) has turned his family home into a school for mutants so they can learn how to use their powers. Hank McCoy (Nicolas Hoult) help him at his school also. He has several new students, Scott Summers (Tye Sheridan), Jean Grey (Sophie Turner) and Kurt Wagner (Kodi Smit-McPhee) to add to his others that he is already teaching, but when Raven (Jennifer Lawrence) turns up to tell him that Erik Lehnsherr (Michael Fassbender) has gone bad again after the murder of his family that he formed whilst hiding from the law after the events of the previous film.

Not only has he turned bad, though, he has also joined El Sabah Nur along with Psylocke (Olivia Mann), Ororo (Alexandra Shipp) and Angel (Ben Hardy) in his quest for domination.

If you’ve got so much happening, you may as well throw fan favourites Quicksilver (Evan Peters, in a sequence that is quite possibly the most fun ever had with super powers in a film), Alex (Lucas Till) and a certain clawed mutant that some people kind of like too.

Will all these good mutants be able to defeat these four horsemen and Apocalypse?

One would assume so, but how will they do it?!?

As you can immediately see by my synopsis, the movie has a LOT of cast and a LOT of stuff happening, and it almost requires the superpower of ‘ultimate attention span’ to keep up with it. Fan service is good in comic to movie situations, but this is ridiculous.

The key to the X-men films, and I guess all comic-to-film adaptations, is that your comic fandom has to be checked at the door, and X-Men Apocalypse is no exception. The movie history and the comic history follow different paths, but one still gets a thrill when one sees favourite heroes pop up, even if their comic history is in a different context.

Outside of those criticisms, the story isn’t bad though, it’s just plot and character heavy. Bryan Singer’s direction is as good as it ever was, and honestly I wish he would do more science fiction outside of the X-men scope.

The key to how clever these post X-men: First Class (2011) X-men films is though is how they still sit in with the other films, even though the timeline has been changed. It was an incredibly clever deus ex machina that was able to relaunch the series from the first trilogy to this one, and realistically, Apocalypse is another one to relaunch the series yet again.

X-Men Apocalypse is a pretty good film for sure, but there is constantly a hell of a lot happening, so don’t turn your back for a second. Thankfully due to their resets, the X-men movie universe doesn’t suffer from the entire weight of, say, the other Marvel Avengers films, in which the viewer has an obligation to see every film across multiple franchises to get the full story. Here at least one only has to watch the ‘X-men’ series, and the Wolverine and Deadpool films are merely garnishes. 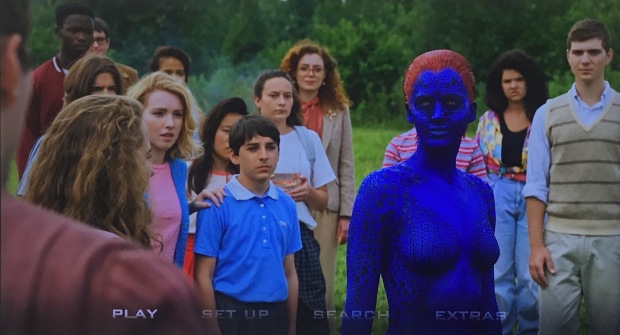 Format: This Australian bluray (steelbook) release of X-Men Apocalypse runs for approximately 143 minutes and is presented in an immaculate 2.40:1 aspect ratio with an amazing DTS-HD Master Audio 7.1 Master Audio.

Extras: A nice bunch of extras on this disc:

Deleted and Extended Scenes with Optional Introductions by Bryan Singer. There is a great tribute to John Hughes films in the scene titled ‘The Safety Dance’, these can be watched either with or without introductions by Singer.

Gag Reel is what it says it is, not the greatest of its type but certainly has a couple of funny moments. It’s not an all-day guffaw fest though!

Wrap Party Video is a series of behind the scenes clips put together to music. The title would suggest it was shown at the wrap party.

X-men Apocalypse Unearthed is a series of 6 mini features which go together to make a complete ‘making of’. I don’t know why this had to be made into 6 smaller features when it could have been one total one, that’s not to say they aren’t interesting though! I have to say one of the greatest things I’ve ever seen is Bryan Singer face timing Patrick Stewart so he could watch James McAvoy get his head shaved so he could be a ‘proper’ Professor X. Is that meta or surreal? I can never tell.

Audio Commentary by Bryan Singer and Screenwriter Simon Kinberg is pretty good, but they get caught up in watching the film and there are a few breaks in the commentary.

Photo Galleries are something I normally hate if it’s just movie stills, but this is an amazing series of pre-production paintings and on-set photographs, so i’ll belay my normal complaints.

There are also a bunch of trailers of the film.

Easter Egg is just a hidden bit that could have been stuck in the gag reel that goes for about 5 seconds. Yawn.

This bluray edition also came with a digital download of the film.

WISIA: Being an old comic fan means I love watching comic movies, over and over again, this won’t be any different.