One from the re watch pile…
Halloween III: Season of the Witch (1982)

Film: Over the years, Halloween III: Season of the Witch copped a lot of crap. I can still remember a conversation I had with the receptionist at a company I worked for in 1988, Lisa (a fellow horror fan) where she said that when she saw it, the only part that excited her was the image of Michael Myers walking down the stairs on the TV Tom Atkins watches as the Buccaneer Lounge.

I disagreed with her. Irwin Yablans claims that removing Myers from the series was a misstep after having part one and two starring him, but as far as we were concerned, he was dead, and it was time to perhaps take the series in a new direction. The concept at the time was to release a ‘Halloween’ film every Halloween, but each film could potentially be the beginning of a brand new franchise, or a stand alone film.

I think that was a great idea, and let’s face it, Friday the 13th did not an entirely dissimilar thing with its horror subgenre gear changes from giallo to slasher to giallo to zombie to supernatural to science fiction switches throughout its first ten films.

Would this film have been a success if it didn’t have the ‘Halloween’ label on it? Perhaps, but it shouldn’t be punished for it either as I think it’s a pretty good horror film in its own right!

Halloween III: Season of the Witch tells of Dr. Daniel Challis (Tom Atkins) who teams up with the daughter of a deceased patient, Ellie Grimbridge (Stacy Nelkin) to travel to the town of Santa Mira, home of the Silver Shamrock, run by Conan Cochran (Dan O’Herlihy) in an attempt to find out what happened to her father, but what they find in the small berg is death and horror!

An evil plot is uncovered which may result in the death of hundreds of thousands of children, and does it have something to do with the missing piece of Stonehenge?

Of course it does!

Halloween III: Season of the Witch is a fun horror romp that is creepy and clever and well worth a watch, though the Silver Shamrock song is an insidious jingle, like the very best/ worst of advertising you’ll see at any time on your TV, and it will get stuck in your head for days.

It’s not a perfect film though, and the bad guy’s overall plan is a little murky in its intention, like the worst of James Bond baddies, and the combination of science and supernatural require a small leap of faith at times.

Essentially, the film is a decent watch that didn’t deserve the criticism it received at the time it came out. 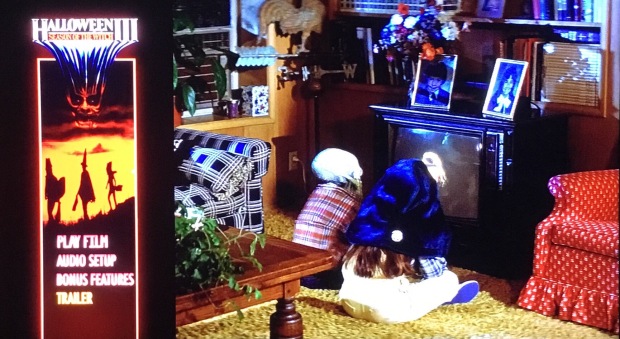 Format: The reviewed copy of this disc was the Australian region B bluray release. The film runs for approximately 99 minutes and it presented in a clear and decent 2.35:1 image and DTS-HD Master Audio 2.0 audio.

Extras: Not a bad amount of extras on this disc:

Stand Alone: The Making of Halloween III: Season of the Witch explores the reasons behind the dumping of Michael Myers from the franchise, and in general, the actual making of the film. There’s interviews with director Tommy Lee Wallace, producer Irwin Yablans, DoP Dean Cundey, actor Tom Atkins, stunt coordinator Dick Warlock and actress Stacy Nelkin.

Horror’s Hallowed Grounds revisits the various locations from Halloween III today. It’s cool to see what all those 80s locations look like now, and it’s pretty funny too.

Stills Gallery, I bloody hate stills galleries, and this is no exception.

There is also a series of TV spots and a trailer.

In addition to all that, there are 2 commentaries, one by Tom Atkins and one by Tommy Lee Wallace. Both are interesting in their own rights, and are thankfully led by interviewers to fill any quiet spots.

WISIA: Even though the Silver Shamrock song gets stuck in my head for weeks after, I can’t resist rewatching this film. I’ve always liked it and never understood the detractors from it.