One from the to watch pile…
H.P. Lovecraft’s The Whisperer in Darkness (2011) 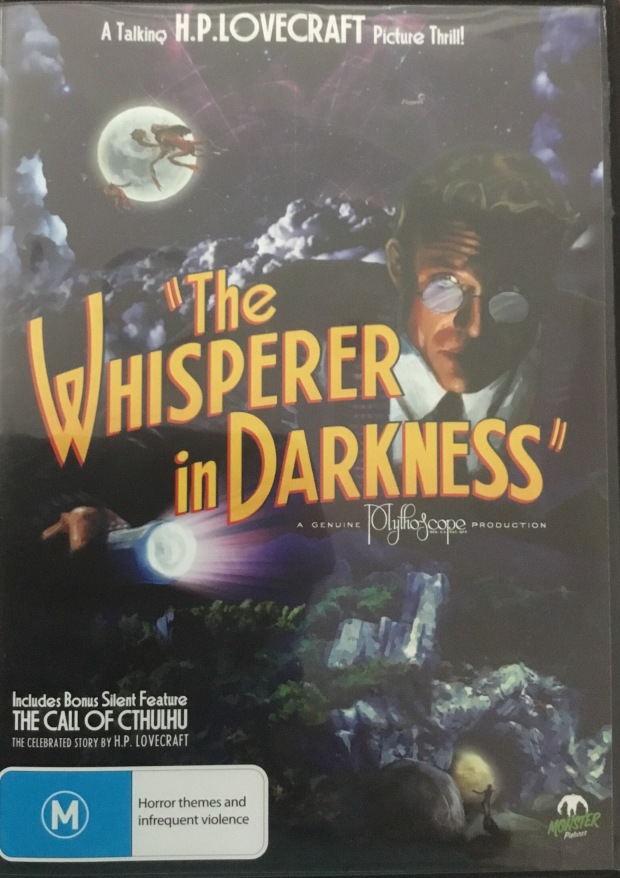 Film: A discussion circulating the idea of ‘horror’ cannot be maintained without the mentioning of one particular name: Howard Phillips Lovecraft, better known as H.P. Lovecraft. Lovecraft is one of my favourite horror authors, though some may say he is actually a science fiction writer! I first discovered Lovecraft after watching the film ‘Re-animator’ and fell in love with the stories and style, mainly due to how different it was from the Richard Laymon’s and Shaun Hutson’s and James Herbert’s that I had been devouring.

As much as I love director Stuart Gordon’s film (as a matter of fact, it’s my favourite horror film – I think it’s the perfect horror film) and his other adaptations, I always felt the modernisation of them did the original stories a slight disservice… though perhaps I was wrong in that thinking. 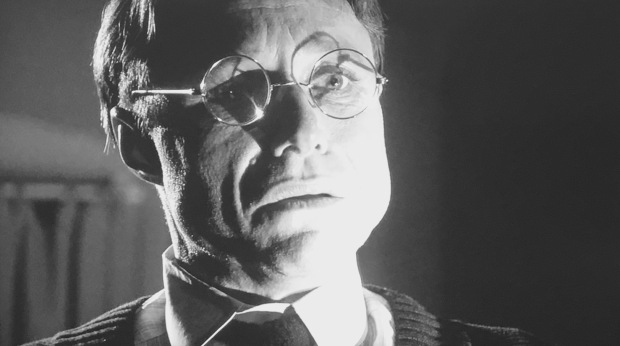 The Whisperer in Darkness: Matt Foyer as Wilmarth

This film comes as a revelation as far as keeping to the time period is concerned. It’s kept very low key, so the anachronisms are kept to a minimum. First, the filmmakers had the idea to set the film in the year in was written with the cinematic style of the era (black and white with a grand soundtrack) and it’s a great one, the entire structure of the film feels like it was made in the early years of the talkies, though the clarity of the film reveals the truth. There is some great tributes to other horror films through the ages, and to the author as well.

The story tells of Albert Wilmarth (Matt Foyer) a skeptical literature teacher at Miskatonic University in Arkham who engages, from a negative standpoint, in a debate about creatures supposedly seen in Vermont after some flooding. He is eventually convinced to personally investigate after he receives letters from Henry Akeley (Barry Lynch) via his son George (Joe Sofranko) but what he finds in Vermont may actually prove his disbelief to be inaccurate, and maybe there are creatures… and their human supporters… engaging in dark rituals…

Even though this is a supposed accurate portrayal of the film, it does actually extend the short story to flesh it out, and theres nothing wrong with that. It is shot well, and I’m sure whatever Lovecraft societies exist would appreciate what the filmmakers have done, and there are some real clever usage of light and sound.

The Whisperer in Darkness: what’s in the cave?

There is some pretty good effects in the films, but the CGI creatures are jarring as they just aren’t very well realised. This is possibly unfair as it is a lower budgeted film, but still, they stick out as being fake and ineffective.

This film is one of those slow burn films, and that’s not necessarily bad as slower, deliberate horror films, like say, The Wicker Man, can be effective. The acting is excellent and as melodramatic as it should be to replicate the time, but perhaps Gordon was right in modernising the stories and adding boobs and blood ‘n’ guts to the unfolding events as this has not lopped Re-animator off the top of my list, nor does it rival From Beyond, another of Gordon’s efforts. It is a decent film and an enjoyable watch.

Format: The reviewing disc of the film is the Monster Picture’s Australian multi-region DVD which runs for approximately 103 minutes is presented in a good 16×9 letterboxed visual with an excellent Dolby Digital 5.1 audio track. The image is clear and sharp all the way through.

Extras: A cool collection of extraterrestrial extras turn up on this disc. The first is an interesting making of The Whisperer in Darkness which is amusing, and makes movie-making sound like an awful thing that anyone could ever want to do. There is also a trailer for the film.

Next is the short film, The Call of Cthulhu which, like the feature is done in the style of when it was written, so we have a black and white silent film, complete with title cards and almost German Expressionistic styled make-up and environments. The music is also melodramatic as one would expect. Even, the the recent way of doing things, to ‘age’ the film they have added grit, hairs and an occasional touch of telecine wobble. Sure this has been over done since the ‘grindhouse’ revival several years ago, but it adds to the atmosphere much more in a film that’s replicating the age… though all of the camera work may NOT do the same thing. There is also a trailer for this film.

In addition, there is a commentary performed by director Sean Branney, writer Andrew Leman and cinematographer David Robertson and is a pretty complete, informative and entertaining one.

All in all an epic bunch of extras with a pretty cool short film make for an excellent package.

The cover claims that their are more extras at the Monster Picture website (unreviewed).

WISIA: This was a grand attempt at doing ‘proper’ Lovecraft, but I can’t wholly see me watching it again.