This film serves a double purpose. It is the first of February, the final month of the Australian summer, and what better way to spend your final month of summer than on a beautiful island, with clear waters to sail upon, and the undead who wish for your destruction. Also, this is the first review of the To Watch Pile’s Zombruary: a whole month of nothing but reviews of zombie films!
One from the re watch pile…
Zombie Flesh Eaters (1979)

Film: I love Lucio Fulci films as they appeal to all the things I love about horror: the disturbing tale, the gore, the nudity, the violence, and especially in Fulci’s case, the sheer oddball-ness of it, or as ‘proper’ educated film critics may put it, his use of surrealism to convey the supernatural.

But I’m just some dude who likes horror movies, so I probably wouldn’t say that!

An abandoned ship enters New York Harbour with a soul occupant who attached a harbour police officer before being shot, and knocked off board. The owner of the boat’s daughter, Anne (Tisa Farrow) is notified of the murder and decides to sneak onboard to see if she can what happened to her missing father, who did not return with the vessel.

When she sneaks onboard, which is being guarded by the NYPD, she meets reporter Peter West (Ian McCulloch) who is looking for a story, and the pair of them quickly team up to back track her father’s movements to find where he has been, and what may have happened to him. They charter a boat owned by Brian Hull (Al Cliver) and his lovely girlfriend, Susan Barrett (Auretta Gay) and make their way to the island of Matul.

…but what they find is a seemingly mad doctor, Dr Menard (Richard Johnson) fighting against the undead!!! Will they find out what happened to Anne’s father? Will all of them escape the island alive? Is this the beginning of some kind of zombie holocaust; some kind of dawn of the dead?

This isn’t my favourite Fulci film: The Beyond has that honour, but instead this still sits high on the cool list for me.

First up it’s cool that a zombie film of this period actually has a reason for the dead coming back and it’s not just some kind of facility for cinema to tell us about ourselves. I love the fact it’s just a film about zombies, and not ‘consumerism’ or whatever.

Then its just the flat out insanity of some of the scenes: the zombies aren’t freshly dead like in Dawn of the Dead, they look almost mummified and have a real creepy texture about them. Except for one, the one that fights the shark, near the basically naked Audretta Gay in a g-banger and a scuba tank.

Finally, the gore is just so fantastically over the top one can’t help but just marvel at it, I mean, it’s not extraordinarily realistic, but even to attempt some of the ideas in a world of practical effects is absolutely awe inspiring. Even going back around to the zombie versus shark sequence, one can’t help but marvel at the job.

Basically, this movie is awesome. Get it, watch it, love it! 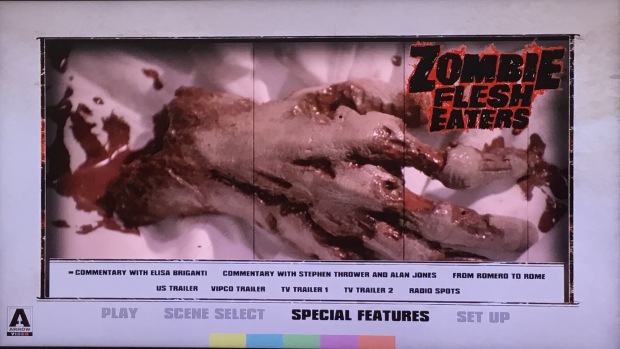 Format: The film is presented in a really nice 2.35:1 restoration with a choice of two excellent audio tracks, English or Italian, in Dolby Digital 2.0. It’s never looked at good as this, for certain!

Extras: Not sure if it’s an extra or not, but there is the opportunity to watch this film as either Zombie Flesh-Eaters, Zombie or Zombi 2. Which ever one you pick, it’s introduced by Ian McCulloch, and it’s really just a change in the title card and nothing else. Is that an extra? I’m not sure, but I thought it bore mentioning!

Also the release I have is a pretty fancy steelbook with some cool original art, and the packaging contains an excellent booklet with articles by Stephen Thrower, Calum Waddell and Craig Lapper, photos of the original script with comments by Jay Slater, Fulci’s CV and a full cast and crew list, all fully illustrated.

Outside of that it’s an Italian smorgasbord of extras. This disc treats us to two commentaries, one with Elisa Briganti who co-wrote the film with her husband Dardano Sancchetti and the other with U.K. horror journalists Stephen Thrower (writer of Nightmare USA) and Alan Jones (writer of Dario Argento: The Man, The Myth and The Magic). Both are fascinating, with Briganti’s being a fantastic look at the making of the film and the Thrower/ Jones one is a fantastic retrospective from two movie journalists, and fans, with whom I have a lot of respect.

Next we have a documentary called From Romero to Rome: The Rise and Fall of the Italian Horror Film. Starting at Night of the Living Dead, but with reflections upon older ‘zombie’ films, it looks at the Italian output in reference to Romero’s output. It’s a great look at zombie films for zombie fans.

There is a heap of trailers and advertising material here, with a U.S. trailer, the Vipco trailer, 2 TV trailers and some radio spots.

Then we have a second disc of just extras!

The first on this disc is called Aliens, Cannibals and Zombies: A Trilogy of Italian Terror which sees Ian McCulloch discuss his acting career.

Zombie Flesh-Eaters: From Script to Screen sees doco director Calum Waddell totally nerd-out (and rightly so!) at an original copy of the script with Dardano Sacchetti.

Music for a Flesh Feast is a Q and A with Fabio Frizzi which is pretty interesting look at how a composer approaches a film.

WISIA: I couldn’t actually accurately tell you just how many times I have watched this film, it’s awesome!