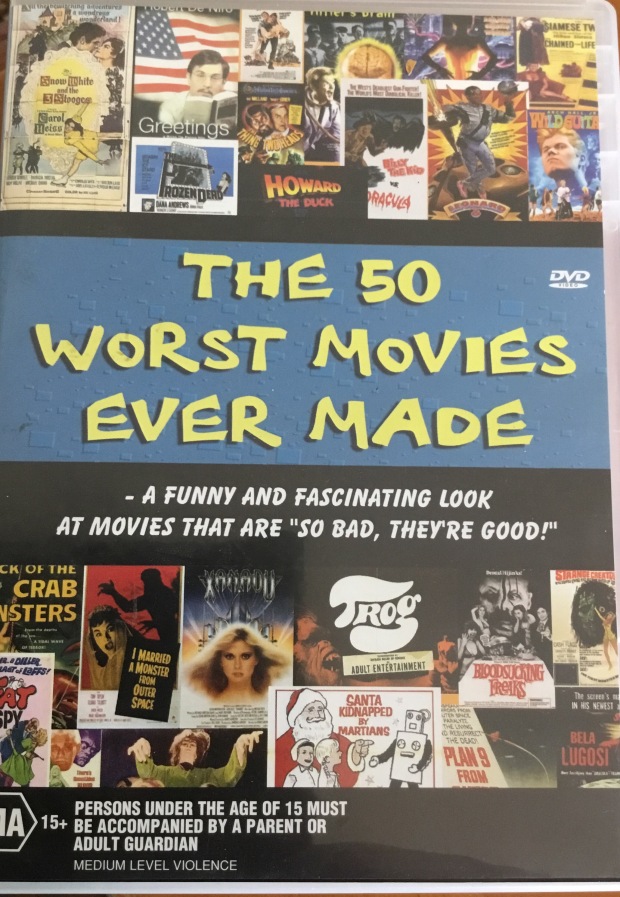 The 50 Worst Movies Ever Made Australian DVD cover

Film: At some point in any discussion about films, one with a bunch of friends or colleagues that enjoy cinema, will include a question ‘what are you favourite film’, or ‘who are in your top five favourite actors’ or ‘what are the five worst films you’ve ever seen’.

This DVD is a documentary… well, not a documentary’ it’s fifty short clips exploring what ‘someone’ has picked to be the 50 Worst Films Ever seen. Now there is no quantification on this disc: that is, at no point do they say that this list is made by box office (though they do mention it in several occasions), or by some questionnaire sent to a bunch of cinema experts with various university degrees .

The 50 Worst Movies Ever Made: Troll, you suck.

No, this film is the brainchild of Brandon Christopher, an artist and writer who gained experience in his twenties in making documentaries about famous people by..ahem… ‘borrowing’ footage off TV and stitching them together to make ‘legitimate’ documentaries. It would seem that he decided which are the worst 50 films, and realistically, why can’t he pick his 50 Worst?

The rest of us do in our conversations, don’t we? We just don’t have the gumption to make and release a DVD about It!

This film counts down from 50 to 1 what Christopher has decided arevthe 50 Worst, each with a voiceover poking fun at the film, and quite possible one of the worst introduction screen to each film of cinema goers throwing popcorn and food at a cinema screen… but the animation is just of the food and stuff is horrible… it’s actually number 1 of my 50 Worst animationed title screens.

The 50 Worst Movies Ever Made this film slams several films who one hundred percent deserve a kick in the nuts for just how bad, and in some cases, how I’ll received they were. I aim the sights of this comment from a grassy knoll at some of the films suggested like Ishtar, Xanadu, The Ape, Bela Lugosi Meets a Brooklyn Gorilla, Killers from Space and The Three Stooges in Orbit… shame this film was made so early this century as I am sure crapfests like Glitter and agods of Egypt should get a bullet each too. I also find that there are some glaring misses like Manos The Hand of Fate, Troll 2 and Jaws The Revenge.

The 50 Worst Movies Ever Made: Golden Globe ‘winner’ Pia Zadora as a Martian girl!

I do film have to take him to task with some of his suggestions though, as he lists Spider Baby, Galaxy of Terror and Bloodsucking Freaks amongst his 50 Worst.

Those three are freaking awesome!

By the way, I’m not going to reveal what is THE worst film ever made, I don’t want to spoil it for you!

Anyway, if this disc does crosses your path at a cheap price it’s probably worth a look, but I wouldn’t actively pursue it or pay more than a buck or two for it.

The 50 Worst Movies Ever Made menu screen

Format: This Australian release DVD runs for just under 60 minutes and is presented in a shoddy 4:3 image, but that’s probably due to the fact the source material is old, not well preserved movies, and the sounds, mainly a voiceover, is presented in a good Dolby Digital 2.0 track.

Extras: The only extra is something called ‘The Rating Scale’, which describe a bunch of ways one can tell that the movie is going to be bad, but for me, some of the things they describe, like ‘a man in a monkey suit’ are the only reasons I DID see some movies!

WISIA: If you have a bunch of mates around who are of a similar temperament when it comes to films, this is a pretty fun casual, and drinking beer, watch. It’s a sports highlight reel for bad movie nerds.

The 50 Worst Movies Ever Made: a musical starring Merle Haggard trapped in a haunted house? Yes please!