Happy Easter everyone! Hope you are enjoying your eggs and get to spend some time with the ones you love. The guy from THIS particular film wanted to do that very thing, but got more than he bargained for…
‘Tis the day of resurrection, and so here is one from the re watch pile…

Film: The first Return of the Living Dead film was a revelation to me when I saw it at Village Cinemas Sylvania when I was a teen. It was probably one of the first dates I ever took a girl on, and she never went out with me ever again.

Everything that was achieved in the film was amazing: art design, soundtrack, the cast… it felt like, to this little Australian suburban kid, what the American punk experience would be like, and then you throw something like zombies into the mix: astounding!

A few years later the sequel came out, and I was a slightly older teen then, but could immediately recognise that the new filmmakers hadn’t necessarily realised what made the first film what it was and filled the sequel with a real generic group of victims and they amped the dumb comedy up as they possibly didn’t have the skill Dan O’Bannon had with delivering the subtleties of black comedy.

By the time I had heard a third was coming out I was rolling my eyes, wondering how crap it could be… then I saw female lead Mindy Clarke on the cover of Fangoria and I though immediately,’ I gotta see this’. Looking like the daughter of a mating between Pinhead from Hellraiser and Trash from the first Return of the Living Dead, the contrast between the actress’ beauty and her ‘body modification gone bad’ appearance stunned me, and put this film in my headlights!

Whereas the first sequel had gone for laughs, this sequel written by John Penney (The Kindred) and directed by Brian Yuzna (Beyond Reanimator, Society), I had a pretty good idea that this movie was gonna be a trip.

Julie (Mindy, now Melinda, Clarke) is desperate to see what goes on in her boyfriend Curt’s (J. Trevor Edmond) father, Colonel Reynolds’ military research facility. Curt, due to… well him being a teen and Julie being smoking hot… steals his father’s security card and sneaks in to find out what is going on. 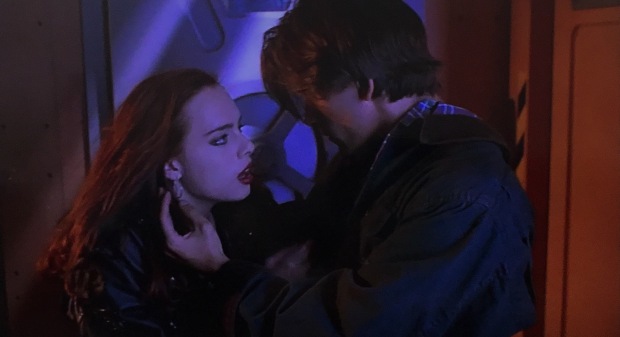 What IS going on is that Colonel Reynolds is a part of a team who are trying to use 2-4-5 Trioxin, a chemical originally created to destroy marijuana but had the awful side effect of bringing the dead back to life, to try and create an army of controllable undead ‘bio-units’ to use in war instead of living soldiers.

They witness one of the experiments, and Julie becomes entranced by the idea of the Living Dead, hungry for brains.

Unfortunately, Curt and Julie have an accident and Curt decides to take Julie’s corpse to the lab to revive her, not knowing, or not caring, that she’ll become a zombie.

Of course she does become one, but finds that through self-mutilation she can control the urges up to a point… but how can a relationship work when one of the members is a reanimated corpse? Especially when you’ve upset the local gang… and maybe have bitten one of them…

This film is a blast; director Brian Yuzna isn’t the greatest director who ever lived, but what he lacks in talent he makes up for in enthusiasm and his ability to assemble a cast who can deliver a crazy story convincingly. Also, his lack of restraint when it comes to special effects is also something to be admired!

Black humour is one of those things than can easily not work, and the best thing they could of done with this story was keep it as the tragedy it was set up to be, which they did, and the whole tale works perfectly. Using some of the ideas proposed in the other two films, that is: being dead hurts, makes for a pretty interesting journey our heroes go on.

It’s atypical of most zombie films as there are actually few zombies! There’s no gigantic pandemic, no masses of the undead, just a couple of people in love making bad decisions… it even at times riffs on Frankenstein with its creator/ monster relationship.

I do enjoy every second of it and recommend it to fans of the zombie genre. 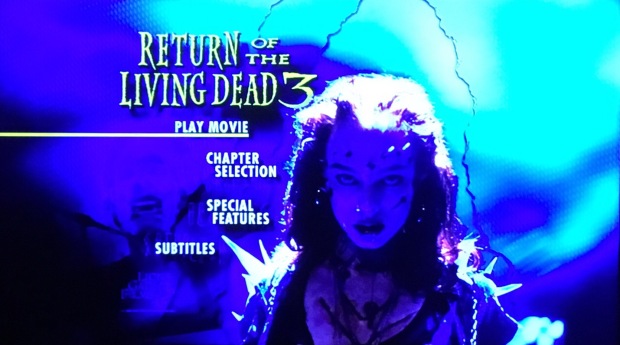 Format: The reviewed copy of this film was performed on a region 1, USA release DVD which is about 10 years old. The film runs approximately 96 minutes with a not very sharp 16×9 image but with an OK Dolby 2.0 audio track.

Extras: Surprisingly, this disc has three extras on it. There are two commentaries, one with director Brian Yuzna where he muses on the creation of the film and his cast and crew, and the other with actor Mindy Clarke, and second unit director Tom Rainone. Both are interesting, and it’s even more fascinating to hear about the making of a film from employer and employees.

There is also trailers for this film, and other Yuzna directed films Progeny, The Dentist, The Dentist 2 and Faust.

WISIA: I really like this film and honestly, probably haven’t seen it enough! It’s time it returned to a higher rotation!