One from the re watch pile… and happy Mother’s Days to all the Mums and Moms out there!

Film: Troma’s Mother ‘s Day is one of those films whose notoriety is probably more what it’s known for than its actual execution. It was originally banned in the U.K., but was then passed by the BBFC uncut in 2015. Here in Australia it was originally released uncut in the early 80s before being reviewed and then banned a few years later. I managed to see it when I worked at a video shop in my early teens and liked it, but haven’t seen it again until my receipt of this UK release.

This film was cowritten (with Warren Leight) and directed by Charles Kaufman, brother of Troma film legend Lloyd Kaufman, and who strangely also wrote episodes of kids cartoons Kissyfur, Dennis the Menace and Marshall Bravestarr later in his career!

Three former sorority sisters, Trina (Tiana Pearce), Abbey (Nancy Hendrickson) and Jackie (Deborah Luce), once a year leave their mundane lives to get together and re-unite for fun on various weekend getaways, but this year, their trip takes a more vicious turn.

Jackie has organise a nice trip to the woods, a camping holiday, but what they find in the Deep Barons Wilderness Area is a vicious family, led by the matriarchal Mother (Béatrice Pons), and her vicious sons Ike (Frederick Coffin) and Addley (Michael McCleery) who like to entertain Mother by kidnapping, raping and murdering anyone who crosses their paths, but will the tenacity of these collegiate buddies help them rise above their captors torture?

Well you’d better see the film and find out!

Tonally it’s a strange film. There is a sense of whimsy at first, with a couple of red herrings thrown in for good measure, with a few over the top New York characters and that classic Troma style ‘comedy’, but when the family are re-introduced, after a small murderous prologue, it shifts to a real horrific film about suppression of will and torture, he not just of the victims either, the mother is good at manipulating her sons into doing what she tells them as well.

The hillbilly family seem to also represent this weird, modern day (well, for the early 80s) commentary on consumerism and self-help guruism, as their house in preposterously filled with televisions and name products, not to mention gym equipment and muscle magazines… even when they get a camera, it’s referred to as ‘the Kodak’.. all in attempt to make themselves ‘citified’ instead of ‘backwards’. I’m not sure if the message here is that ‘citified’ folk are savages, or that you can’t change where you come from no matter how hard you try to spend money to do so.

Another thing I like about this film is the cover art. To parody Whistler’s Mother in a poster for a film of this caliber is a funny thing.

The film is certainly deserved of its cult status and is surprising well executed even with its low budget and exploitative storyline. It also offers some clever viewer manipulation is its switching up the heroine too.

The plot hole left open is the debate of whether punk sucks, and is disco actually stupid… 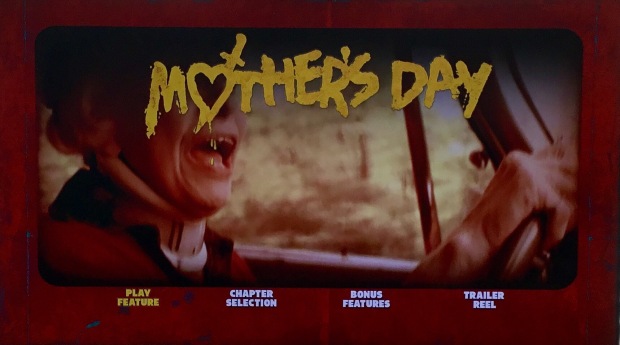 Format: The reviewed copy of this film was the 88 Films multi-region bluray from their Slasher Classics Collection (this one belong Volume 2) and runs for approximately 90 minutes. The film is presented in an amazingly clear, considering its pedigree, albeit it with the occasional artefact, 1.85:1 image with a clear HTD-DS 2.0 audio.

Extras: Heaps of extras on this disc:

There is a commentary with Charles Kaufman and Rex Piano and is a pretty interesting one. Kaufman’s recall is amazing and he has some pretty funny anecdotes.

Charles Kaufman Intro sees the writer/ director briefly talk about the film and his post-cinema career, though it’s just funny enough to suggest he and his brother are not too dissimilar.

Rex Piano Intro sees Kaufman’s PA on Mother’s Day briefly wish you well on your watch of the film.

Behind the Scene’s Super 8 Footage sees Kaufman do a commentary over some preproduction and Test footage stuff.

Eli Roth on Mother’s Day sees film director Eli Roth (Hostel) talk about how much he loves the film and where his obsession with it comes from.

Charles Kaufman and Darren Bousman talk Mother’s Day sees the director talk to director Darren Bousman (Saw II) about the myths and legends of Mother’s Day, and how Bousman didn’t want to offend the fans of the original with his 2010 remake of the film.

There are also a trailer and tv spots for Mother’s Day, and a trailer for Graduation Day.

The Packaging claims that there is also a Collector’s booklet, but my copy didn’t come with it, so boo on you, packers of 88 Films’ blurays!

The slick is also reversible, so you can have either the slick with or without the ‘Slasher Classics Collection’ masthead.

WISIA: I can honestly say that whilst I have seen this before, and it’s certainly a shocking film, it’s not one that will get a regular rewatch.