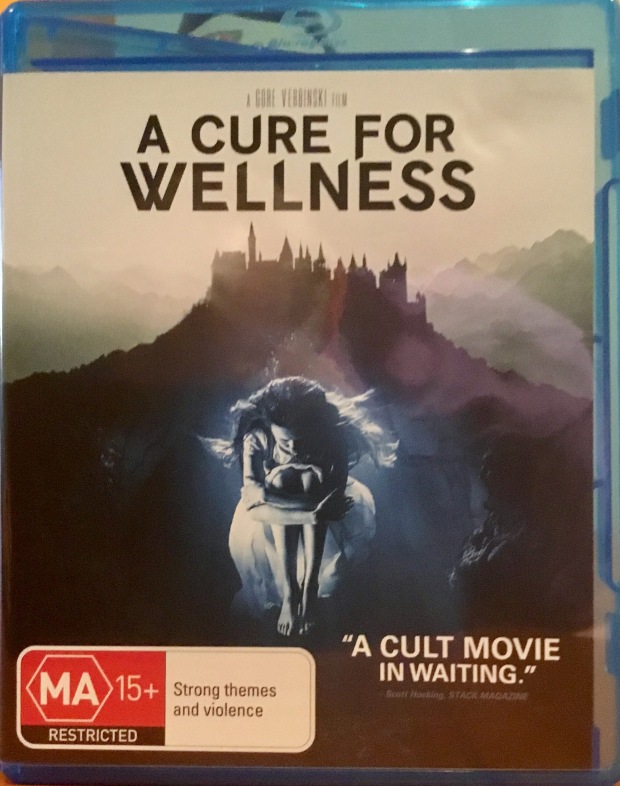 Film: I love it when you get an opportunity to see a film you barely know anything about but surprises you. Especially when the surprise is a weaselling un-nerving that gets under your skin.

I had seen half a trailer for this film A Cure For Wellness, and had decided it was the type of film I’d like to see at the movies, and yet it slipped by quickly and I didn’t get an opportunity to see it until it’s release on bluray.

A Cure For Wellness was written by Justin Haythe, with director Gore Verbinski, who last worked together on Disney’s The Lone Ranger… but don’t let that jade your judgement, or allow it to be used as a deterring factor to watching the film. Any mistakes they may have made together on that film aren’t evident here.

Dane DeHaan plays Lockhart, an ambitious executive at a large international firm that is in trouble. He has been employed by the people upstairs to track down the CEO, Pembroke (Harry Groener) who has retreated to a mountaintop wellness facility in an attempt to ‘get better’.

The facility, run by Volmer (Jason Isaacs) in what used to be a castle, seems to be trying to stop Lockhart from seeing Pembroke and soon, after a horrific car accident, Lockhart finds himself with a broken leg, and interred at the facility.

During his stay he is offered treatments, but the longer he stays, the more he thinks there is something more happening at the facility, something sinister, something involving the youngest patient, Hannah (Mia Goth)….

Immediately, and as can be read by my synopsis, what we appear to have here is a modern-day retelling of Bram Stoker’s Dracula, with the young executive investigating a colleague’s disappearance, only to find that ‘something’ (in Stoker’s case, but not here, a vampire) may have taken them hostage, or performed some other sinister act upon them. The difference is shocking and makes for a kick-ass, slick horror movie.

Typically, Verbinski’s primary skill lies in how damn beautiful the film looks. It is extraordinarily beautifully shot, every scene is like a painting. This isn’t hurt by how damned clear the entire film is too. For the most part it has a very blue and cool palette which is truly stunning, but that colour plate also changes depending on the part of the story that is being told, and looks amazing at every point.

The soundscape is preposterously amazing too. For example, the creak of DeHaan’s crutches are a constant reminder of his temporary disability but every sound has an echoing eeriness to it, and that whole is also made effective by the wonderful presence of Benjamin Wallfisch’s score.

For the most part the cast is fantastic but they have a collective atypical look: there are no traditional Hollywood hunks or beauties in this flick, but this unusual anti-movie star face of the film makes it feel both more real, and surreal at the same time. I admit I had my doubts about Dane DeHaan being the leading man in this film, but he ‘looks’ right for the film.

It seems to me this was mistreated by its advertising as a thriller, when in actual fact this is a flat a gothic horror, with many scenes that look like someone like Mario Bava was the cinematographer. It sits well beside things like Shutter Island and it’s has everything you want from a horror film, though it might be a touch overlong.

Format: This film was reviewed on the Australian, region Bluray, which is presented in a totally amazing 1.78:1 video with a matching DTS-HD Master Audio 7.1.

First, there is a deleted scene, and with a film as long as this one is, I don’t know why it was excised.

Meditations is a series of 3 guided meditations relating to 3 of the 4 elements: air, water and earth. These aren’t your traditional meditations as they have a distinctively sinister nature. They are interesting and creepy.

The Score addresses the totally impressive score of the film by Benjamin Wallfisch, a score so impressive I immediately bought the record as soon as I finished watching the film.

There is also three trailers for the film.

I should also point out the menus are special too. They have a feeling of being stuck, which is perhaps one of the themes of the film.

WISIA: It is such a deep and detailed film that I feel several watchings are in store, and it’s a great story with an amazing look too.