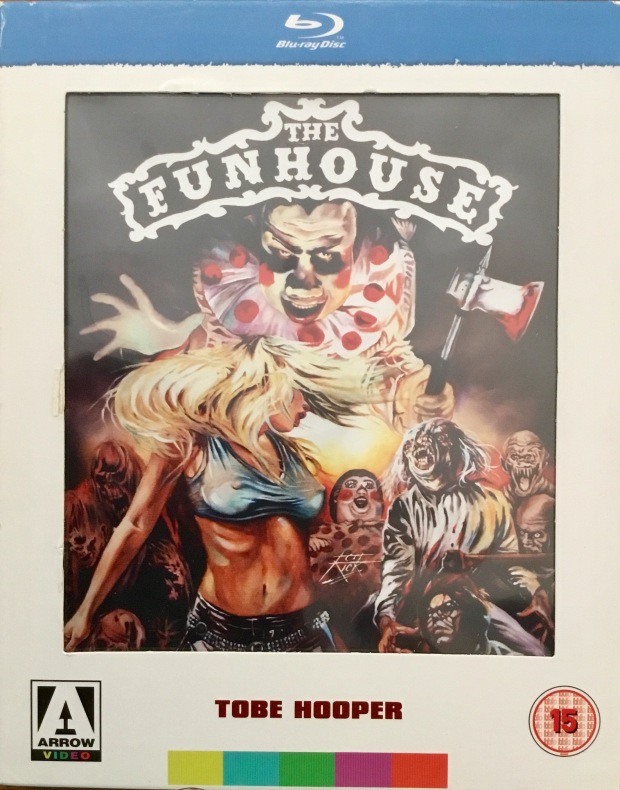 Film: To most people, Tobe Hooper peaked early in his career with The Texas Chain Saw Massacre, but I disagree. I am not the world’s biggest fan of TCM at all, in actually fact I find it to be poorly paced, with a really great payoff, I’ll grant you, but with quite possibly the world’s most annoying character, Franklin.

For me though, it’s Hooper post TCM and 80s output I like better: Eaten Alive, Lifeforce, Invaders From Mars, and even Tcm’s sequel, Texas Chainsaw Massacre 2! Another one of those I like is this film, The Funhouse, written by Larry Block aka Lawrence Block, whose only other real credit was the Matt Salinger Captain America movie made almost ten years after this.

The Funhouse tells of Amy Harper (Elizabeth Berridge) and her blond date, Buzz (Cooper Huckabee) along with friends, Liz (Largo Woodruff) and her boyfriend, Ritchie (Miles Chaplin) who decide, against Amy’s father’s wishes, to visit a travelling carnival, but they get more than what they bargain for.

They decide to spend the night in the Funhouse, but unfortunately bear witness to the carnival barker’s (Kevin Conway) deformed son (Wayne Doba), kill the sideshow fortune teller (Sylvia Miles) after an unsuccessful sexual transaction.

So there they are, trapped in a carnival attraction overnight, pursued by madness… will they all survive.

Oh, the freak show is gonna have freaks (Wayne Doba)

The acting is of a level one would expect from a film of this era, but Kevin Conway in his multiple roles as three different carnival barkers adds a bizarre almost respectability to the whole film, even though he is as creepy as hell, and the ultimate abusive parental figure.

I only saw this film for the first time when this release came out in 2011, and have been a fan ever since, mainly due to the overall tone of the film and the fact that I am an 80s connoisseur, though the fact I find both Elizabeth Berridge and Largo Woodruff cute doesn’t hurt either.

Recommended for fans of 80s slashers. 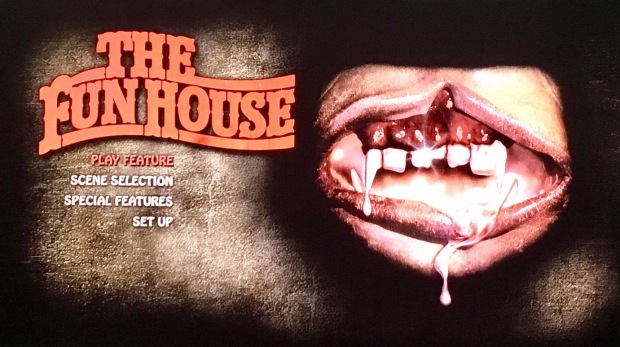 Format: This Arrow U.K. Multi-region Bluray release runs for approximately 95 minutes and is presented in a nice 2.35:1 image with a good stereo 2.0 audio. As one would expect the image is slightly grainy at times, and fairly artefact free.

Extras: There’s no shortage of extras on this disc.

First, three… count them… THREE commentaries! One by film critic/ journalists Calum Waddell and Justin Kerswell, the next by Craig Reardon and Jeffrey Reddick, and the last by Derek Power and Howard S. Berger. They are three completely different styles of commentary but all have areas of interest.

Next there is a trailer for the film.

Carnage at the Carnival sees Tobe Hooper reflect on his experiences in the making of Funhouse.

Miles of Mayhem has Miles Chapin, who played Ritchie, recollect on his experiences on the film and how every decision his character made screwed the futures of the other main characters.

The Make-up Madness of Craig Reardon looks at Reardon’s history with special effects in Hooper’s films.

Tobe Hooper Q &A is a fairly poor quality interview with Hooper around the time of the release of his 2004 film, The Toolbox Murders. Despite the quality, it’s an interesting Q & A.

Stills Gallery is a slideshow of the make up and other behind the scenes shenanigans.

This is one of Arrow’s releases that has the multiple covers, 4 in total, a poster of the film and an illustrated essay booklet by horror historian and author Kim Newman.

WISIA: It’s a fun 80s slasher and yeah, I’ll be watching it again.

Largo Woodruff taunts her best friend for being a virgin.