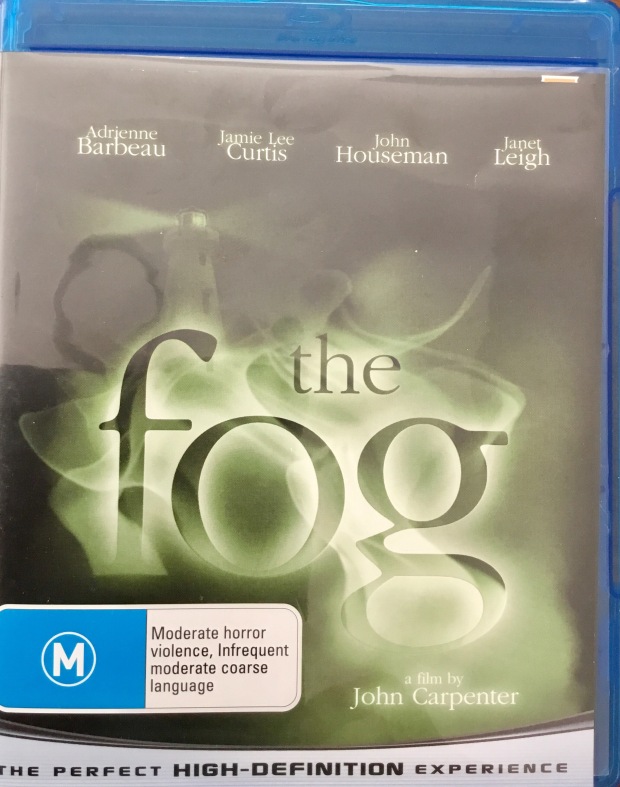 Film: There’s several people who are real heroes of cinema for me: Lucio Fulci and Dario Argento are amongst them, and John Carpenter really stands up there. He is responsible for several films that I really like, like Halloween, They Live and Prince of Darkness, but it’s not just that: his soundtracks that he himself creates sit directly in my love of synth music too. This movie, The Fog, is no exception.

I am not really a ghost/ supernatural fan when it comes to horror movies as I’d rather a slasher or a giallo or mutants or monsters: I like tactile, physical baddies and I think that comes from not believing in ghosts makes me not fear them. Sure a jump scare might alarm me, but I won’t walk away from the film traumatised.

That’s not to say I don’t still watch them though as even though the potential fear doesn’t scare me, I can still enjoy the story, performance and if I’m lucky, some chunky gore.

This is one of those times where the film is solid and the fact it’s a supernatural tale doesn’t matter.

The beautiful seaside town of Antonio Bay has a dark past where a ship full of lepers were killed when their boat was lead to its destruction. Now, 100 years later, the town is ready for its centenary under the guidance of Kathy Williams (Janet Leigh) but the local priest, Father Malone (Hal Holbrook) has discovered, hidden in the church, a diary telling the awful tale of the founding of the town, but the show must go on regardless.

A strange occurrence is happening on this celebration though: a mysterious fog is moving into town, and effecting the lives of the town including DJ Stevie Wayne (Adrienne Barbeau), fisherman Nick Castle (Tom Atkins) and a hitchhiker he has picked up, Elizabeth Solley (Jamie Lee Curtis) but what is in the fog killing people?

Could it be the spirits of the Dead coming back to haunt the descendants of the original families of Antonio Bay? Of course it is.

The first thing I have to say I love about this film is it’s cast: Psycho’s Janet Leigh, Night of the Creeps Tom Atkins, Magnum Force’s Hal Holbrook, Swamp Thing’s Adrienne Barbeau and of course Halloween’s Jamie Lee Curtis, to mention but a few.

Jamie Lee Curtis notices Tom Atkins’ moustache has stuck to his beer can.

This is film is clearly a Carpenter film as well, and I must say his surname suits perfectly as his stories me direction builds slowly and to a fantastic finale, as does his soundtrack… I love it when Carpenter scores his own films!

This is no exception, and the record of this soundtrack gets a regular spin here at the To Watch Pile!

Really though, this film wins with its warm and likable characters who are victims of their ancestors crimes and potentially innocent themselves, and with Caroenter’s masterful handling of the pacing of the film.

Seriously, if you haven’t seen The Fog… or anything else by Carpenter, you need to fix that immediately.

Format: The reviewed copy of this film was the Australian region A/B Bluray release, which runs for approximately 90 minutes, and is presented in a clear, but not wholly sharp, 2.35:1 image with a really nice DTS-HD Master Audio 5.1 audio track.

Extras: Crappy extras on this release, I’m afraid. There is an audio and video configuration test. What?

WISIA: It’s one of Carpenter’s best: you better believe it should be watched over and over again!