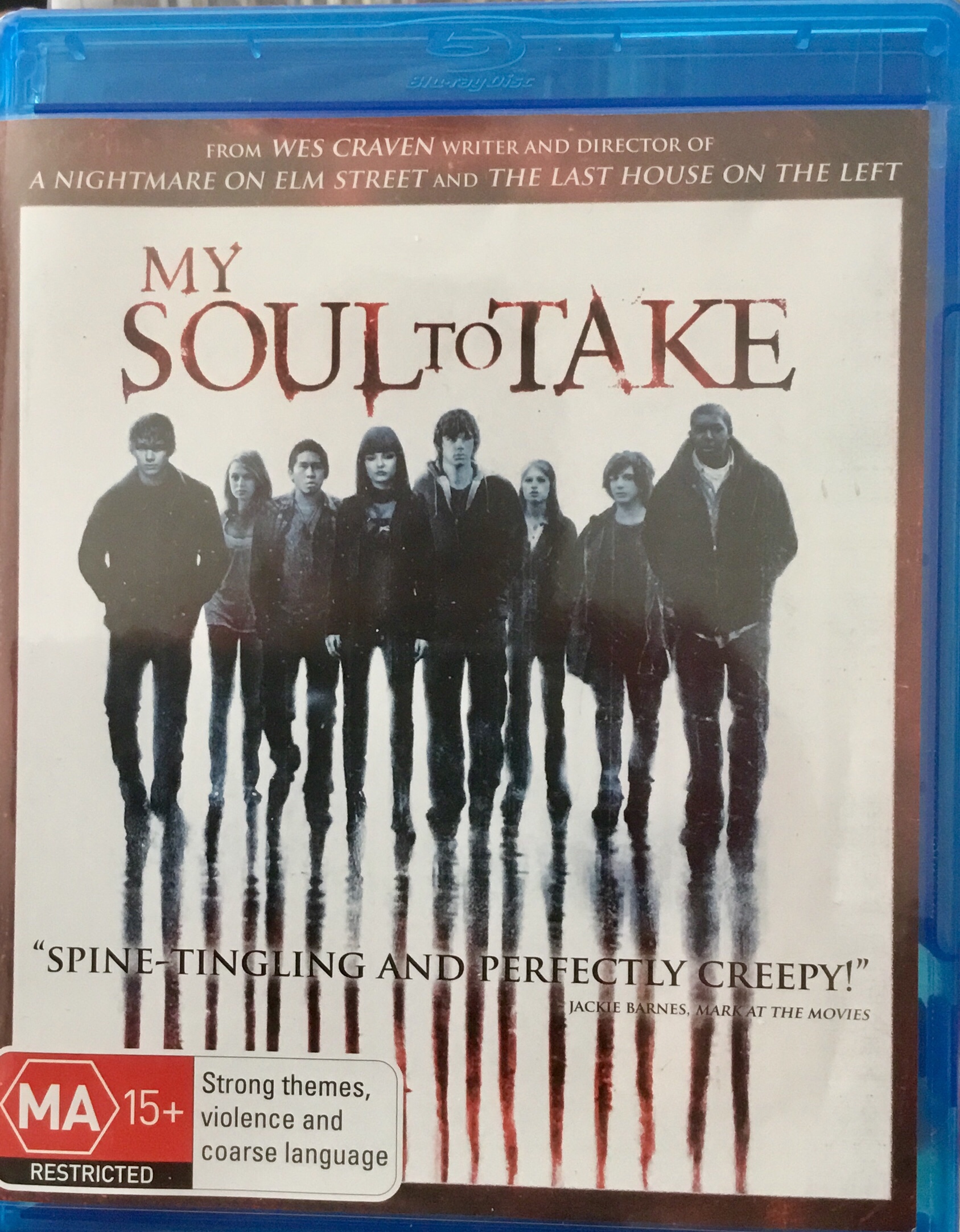 Film: I’m glad I didn’t peak early. I look at people who peaked early in their careers and pity them… well, I haven’t peaked yet so I don’t pity them too much as I don’t know what it feels like, but I imagine trying to reclaim glory must be a total bummer.

Wes Craven is an early peaker to me. Last House on the Left and A Nightmare On Elm Street, especially Nightmare, are two films that are revered by the horror community at large, and Nightmare is one of my favourites of all time. After Nightmare though, Craven didn’t really achieve much until Scream, and even though many love it, the first of them never resonated with me because it was obviously a parody and I also wasn’t much of a nineties TV watcher, so the appeal of Neve Campbell and Courtney Cox meant nothing to me… well, Ok, Drew Barrymore was an appeal but thats it, and it did lead me to discover Rose McGowan!

Anyway, in a further attempt to get another franchise started, we have this film, My Soul To Take, written and directed by Craven, but it feels like a passionless pandering to a studio rather than an exciting creative endeavour… mind you, that’s what so many blockbuster films feel like these days.

My Soul To Take tells the starts off with a man who is having trouble controlling his split personalities and he kills his very pregnant wife in front of his young daughter, after it’s revealed that he is a serial killer known as ‘The Ripper’.

We flash forward to sixteen years later and we discover that the town that The Ripper lived in was one where 7 children were born on the one night, the night the Ripper was killed, one of them being a troubled young man known as ‘Bug’ (Max Theriot) who seems to have his own issues with multiple personalities disorder.

On the anniversary of their birthdays, the 7 kids visit the scene of where the Ripper was killed, a wrecked ambulance, and perform a ritual where the exorcise his spirit for another year. This year it is Bug’s turn to do the deed but he fails when the police turn up to clear the kids out.

Bug is concerned that in failing his mission he has caused doom to come to the town, and maybe it has as the group who share the same birthday start being picked off one-by-one… but is it Bug? It sure seems like it is….

The main problem with this film is there are more loose threads that a pair of undies bought from Best and Less. When the final resolution is revealed, it still doesn’t explain why Bug was absorbing his friend’s personalities or if he was actually absolving their spirits, and why, at only 16, have these children created a myth about the Ripper that feels like it’s been in place for years? At 16 they could only have been doing this ritual for a couple of years so why did it become so ingrained in the social vernacular? On that point, why did the local council leave a burnt out ambulance by the side of a road for 16 years?!?

Basically the entire film has moments of nonsense that aren’t accompanied by anything original. At least Scream made it obvious it was a parody and that kind of made its standard horror tropes ok, this just feels like Craven repeating himself.

The cast are also unconvincing and boring, and even the Ripper has a generic voice that replicates Freddy’s to the point of being a total rip-off.

Can one rip off their own stuff? Yes.

All in all this is a boring, by-the-numbers crapfest of a film with zero redeeming features. Avoid, evade and fend off any opportunity to watch this film. It’s terrible.

Format: This Review was performed with the Australian region B Bluray which runs for approximately 107 minutes had has a fantastic 2.35:1 image with a matching DTS-HD 5.1 Audio track.

Extras: The disc opens with a trailer for the Jean Reno flick 22 Bullets before going straight to the menu.

There are then 5 extras:

Audio commentary with Craven, Theriot, John Magaro and Emily Meade, which when Craven is talking is interesting, but the actors tend to be self-indulgent.

There is also a Theatrical Trailer and Deleted and extended scenes and Alternate opening and endings which the film benefits to not have included, though there are a few images here that are cool, even if they are also reminiscent of other pieces of Cravens work