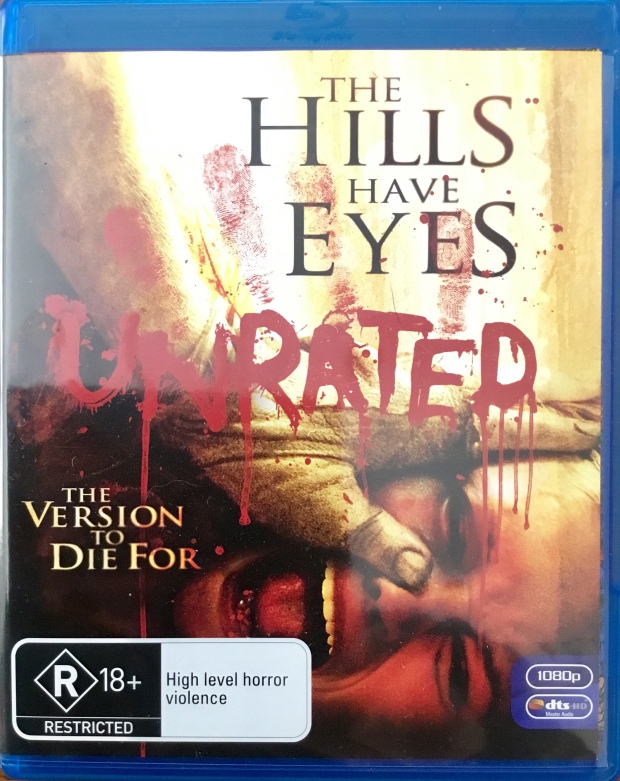 Film: The early 2000s were a wonderful time when every second movie that was released was a remake, not like now when every movie is a Disney film, and every forum on the Internet was rife with old school horror lovers screaming blue murder that a remake would wreck ‘their’ film.

-a remake doesn’t wreck an original film…in actual fact it does nothing to it other than bring attention to it.

– it’s not ‘your’ film, and the owners of the rights can do whatever they feel like to it. You are just playing in their backyard.

Anyway, this remake was directed by French director Alexandre Aja, whose previous film was the unusual, and violent psychological film Haute Tension aka High Tension which many people were stunned by both for its extreme gore, and is use of trickery, and blatant lies to tell its tale. The script, whilst based on Wes Craven’s original film, is written by Gregory Levasseur, who also worked on Haute Tension and Aja’s next film, Mirrors.

The Hills Have Eyes remake tells of a family who are travelling across the New Mexico desert on holiday. When the father, Big Bob (Ted Levine) is told of a short cut not on the map by a gas station attendant of dubious moral, he proves he must have never seen a horror movie a decides to take it.

Part of the way across this ‘short cut’ the family are in a accident staged by a bunch of mutants who live in the mines in the hills, and in the governmental built town made to see how nuclear weapons would effect suburbs. These mutants are the results of the fallout subjected their ancestors.

Quickly, the family are subjected to murder, rape and cannibalism before one of them steps up his game and decides to set things straight, and carves a path of blood and guts across the desert.

Aja proves that his Haute Tension film was not a fluke, and this, his first American film, sits high on my list of amazing remakes, along with John Carpenter’s The Thing and Chuck Russell’s The Blob. Aja has taken Craven’s film and really increased the levels of every threat the family encounter.

A special shout-out has to go to the effects, which to me are a seamless combination of CGI and practical effects, and the soundtrack, not just the incidental music but also the bizarre choices of songs for the opening and closing credits, particularly the opening which is combined with 1950s styled happy-housemaker adverts and deformities of the children of people who were exposed to Agent Orange in Viet Nam.

There is a lot to love about this film and dare I say it, I like it far more than the original.

Format: This film was reviewed with the Australian, region B Bluray release of the film, which is presentin a crystal clear 2.35:1 image and a matching Dolby DTS-HD 5.1 audio track.

Extras: There is a few extras on here which are a pain to access as the disc has no menu screen, so whilst the film is playing you have to use your ‘Pop-up Menu’ button to access them.

There are two commentaries, one by Aja, writer Levassuer and Producer Marianne Maddalena and another by Producers Peter Locke and horror legend Wes Craven. Either individually or watched one after the other they offer a whole pile of interesting anecdotes of the making of the film.

There are 7 Production diaries which can be watched individually or as a job lot. They are crappy handicap filmed behind the scenes stuff with no offer of an explanation throughout and each one only goes for about two minutes. Ultimately worthless.

We also have trailers for this film, From Hell and X-men: The Last Stand.