Who Is Wonder Woman 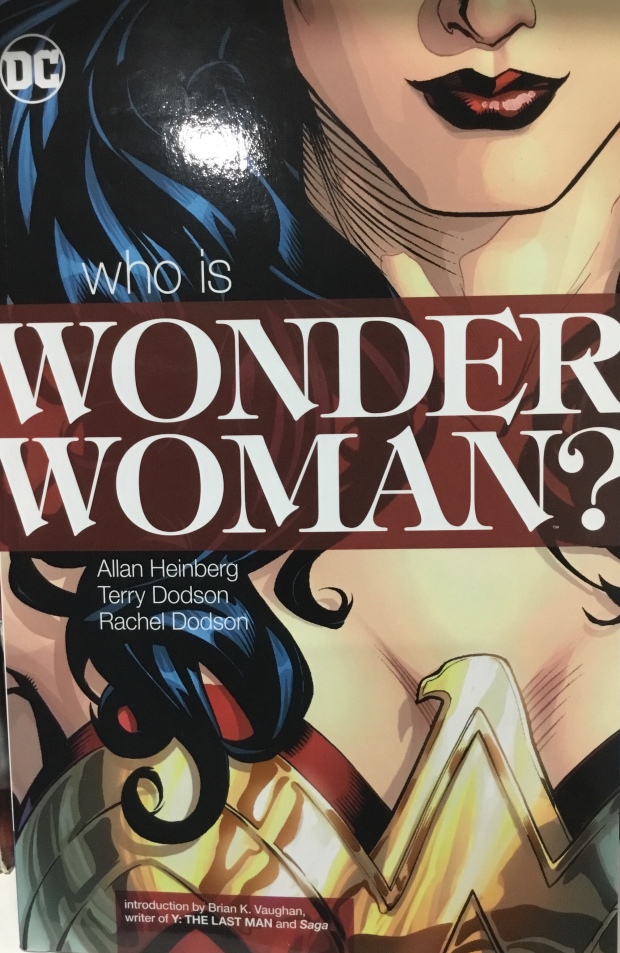 In recent years, Wonder Woman has finally gotten the respect she deserves. That’s in no doubt due to the absolutely amazing reaction from the cinema going public to the Wonder Woman movie starring the spectacular Gal Gadot.

WW has always been one of DC Comics ‘Big Three’, the other two being Superman and Batman, both of whom have been extraordinarily successful in other medium: video games, cartoons, TV shows, movies… but realistically WW has only ever worked before on TV in the seventies, and even then, it took three goes to get that right.

I’m getting ahead of myself through and I should answer the question that is asked by this very trade paperback: who IS Wonder Woman?

Wonder Woman is a character owned by DC comics and was created by William Moulton Marston, and polyamorous psychologist who also invented the polygraph machine, and first appeared in All-Star Comics issue 8 in 1941, with art from Harry G. Peter.

She is a being from the island of Themyscira, a place inhabited by a race of warrior women, and after proving herself through a series of trials, Wonder Woman… or Diana as she is better known, travels to ‘man’s world’ as an emissary of peace.

Now this origin is where Wonder Woman has her problems: over the years, Superman and Batman’s origins have more or less stayed the same, but Wonder Woman’s have occasionally been reinvented, and in that reinvention become a character whose solid foundations are shaky.

Funny enough, though all that change has rocked those very foundations, this trade paperback, collecting Wonder Woman numbers 1 through 4, and annual 1, embraces all that variety and even celebrates it.

This collection has a really interesting introduction by Brian K. Vaughan, the writer of Vertigo’s Y: The Last Man and Image Comic’s Saga which is a real interesting take on the Spirit of Truth.

Story: This story takes place after a massive upset in the DC universe, as Wonder Woman has killed a man known as Max Lord: the founder of Justice League International, and unbeknownst to everyone, a psychic villain with the power to coerce others into doing as he pleases… by breaking his neck.

This story takes up Wonder Woman’s life a full year after that event, and even though she has been exonerated of his murder, she still feels she may no longer be the symbol of hope she professed to be, and so, hands the title of ‘Wonder Woman’ to her younger ‘sister’, Donna Troy.

N.B.: I put the word ‘sister’ in inverted commas as Donna Troy is another character with an origin that has been screwed up over and over and I honestly can’t remember which this one is.

Anyway, Diana has reinvented herself, with the help of Batman and Superman, as Agent Diana Prince and is teamed up with Nemesis, an older DC character at the Department of Metahuman Affairs and gets to face a cavalcade of her enemies, from Cheetah, to Dr Psycho, and even Circe, who even takes on the mantle of Wonder Woman.

Will Diana Prince reveal herself as being the real Wonder Woman, or is the secret identity more important to who she has grown into?

This entire tale of Wonder Woman is a great read, and even though it does have a bunch of guest stars, it never gets bogged down in re-introducing them. Allan Heinberg, a TV and comic writer who is also responsible for the script for the Wonder Woman movie has created a cool spy story, with a bunch of superheroes thrown in for good measure, and it is a heap of fun and runs at a great clip.

Also, it re-invents Wonder Woman without disrespecting what has come before, and even the 60s martial arts master I-Ching gets a mention, as does Diana’s white jumpsuit from the same era.

As a side note: I must admit to having a sly smirk on my mouth when Hercules is re-introduced, and Nemesis refers to him as ‘the REAL one’, as DC’s Hercules appeared in comics over 20 years earlier than Marvel’s more famous one.

There’s is no doubt that I adore the art of Terry Dodson, and when inked by his partner Rachel Dodson, is a perfect storm of super powered heroes that never… Ok, rarely… descends into the anti-storytelling of the nineties books that were cheesecake and beefcake shots. All of the poses of the characters are powerful looking and the story is told really well with some amazing choices of layout.

The redesign of most of the characters fit this story really well. Diana as secret agent looks tough, Hercules looks godlike, Donna Troy, who with a lesser artist would just look like The Diet Coke version of Diana, has her own look and Circe villainy is apparent by the spectacular lighting choices made.

As a side note, there is also a back-up tale by Gary Frank and Jon Sibal with Dave McCaig which is like a revisiting if all the main Wonder Woman characters origins. Frank’s art is as good as it generally is, his superhero bodies are always super-heroic, but occasionally there are some facial expression that look out of place. There’s not really much substance to the story as it is like a sports recap.

WIRIA: It’s a gem that is worth re-reading if only for the Dodson’s spectacular art.