Film: The only thing that has come out of Italy that is better than the food, is horror films. Seriously, the perfect night would be a fresh lasagne, some garlic bread, along with Argento or Bava, and a nice Chianti (insert bizarre suckling noise here). Demons 2 proves, that not everything for Italy’s cinematic feast is delicious.

Demons 2 is directed by the original’s director, Lamberto Bava, and is written by the same writing team of Bava, Dario Argento, Franco Ferinni and Dardano Sacchetti, but it is definitely… spoiler alert… the inferior of the two films.

This film has us in a super high-tech apartment block where various occupants are going about their business of dinner with family, studying for tests, being an 8 year old who is left home alone, having intercourse with high quality hookers, working out in the basement gym and having a birthday party.

The part is for whinging superbitch Sally (Coralina Cataldi Tassoni) who complains about everything and locks herself in her bedroom after hearing that a person whom she didn’t want invited to her party was actually invited by a friend. Whilst in her room, she watches, like several people who live in the block, a documentary about the demon incursion that occurred in the first film. Unfortunately, like the film from the first film, the doco appears to be cursed… or something… and a demon comes out of the TV, attacking Sally and starting the infection all over again.

Luckily the demons aren’t able to escape the apartment block… or can they?

To put it bluntly, this film is pretty bad. Bad,y acted and dubbed at times, with some dreadful dialogue Nd non-sensical plotlines that don’t move the story forward in the slightest. For exampl, some parents are driving home to their son at the same time as the party is happening, but they don’t make it… so why even show it?

The script is a breadless crap pizza with no real logic as to how the demons appear. The Tv show being watched by the viewers are potently infected but the cameraman filming the doco was resistant? What? Thankfully this eventually explained by the fact that the show is being transmitted by a demon TV station (as a heads up, demon TV stations are like NORMAL TV stations. It with flashing lights): I’ve seen some pretty dumb stuff in my horror experience, but demon TV station is up there with the dumbest.

It’s not entirely bad though. Whilst Demons 2 isn’t as gruesome as it’s predecessor, it features some creative effects work. There is a wider variety of demon looks in this film, and there is an amusing Demon Dog sequence. The effects are generally solid except for one that has a worse that Ghoulies rubber puppet look about it.

I also enjoyed the music far more on this film as it was more to my taste : The Cult, The Art Of Noise, The Smiths, Fields Of The Nephilim and others.

This film is far more a string of effects held together by a dodgy story, than a complete film. 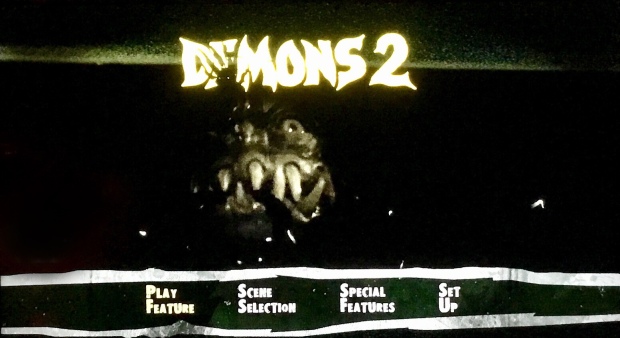 Format: This film was reviewed with the Arrow Video Bluray which is presented in 1.66:1 and has been restored from the original negative. That being said it does contain a bit of noise on the film here and there. The audio is presented in the original mono and does the job just fine. The film can also be watched with its Italian audio track.

Extras: The first thing I should comment on is the excellent packaging design and the non-digital extras. Like most of Arrows Bluray releases when this first came out, we have a choice of four covers on a double-sided Bluray slick. There is also a double sided poster with original movie artwork on one side and art from Jeff Zornow on the other. This package also contains part 2 of a Demons comic, again with art by Zornow and a script by Stefan Hutchinson and Barry Keating. Finally there is a booklet titled Twice the Terror by Calum Waddell which is an interesting celebration of Bava.

There are a couple of extras on the disc as well:

Creating Creature Carnage is a discussion with Italian special effects maestro Sergio Stivaletti. If you are interested in practical special effects this is really interesting.

Bava to Bava: Luigi Cozzi on The History Of Italian Horror is exactly what the title suggests and is the perfect sequel to Cozzi’s discussion on the first Demons release from Arrow Video.

There is also a director commentary hosted by Calum Waddell featuring Bava, Stivaletti and journalist Loris Curci. It’s not the greatest commentary in the world, but when they do speak, what they say is very interesting.

WISIA: The first Demons film is an Italian classic, watch that again instead of this. 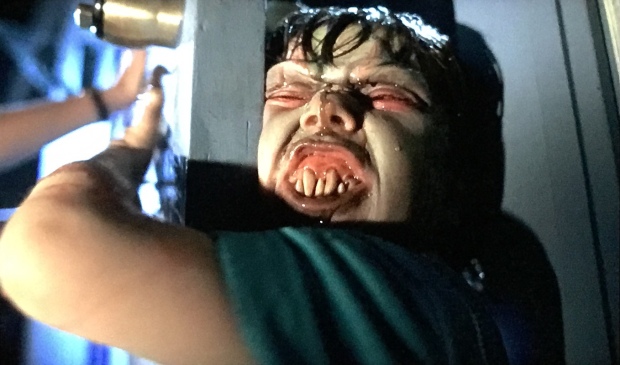