One from the to read pile… 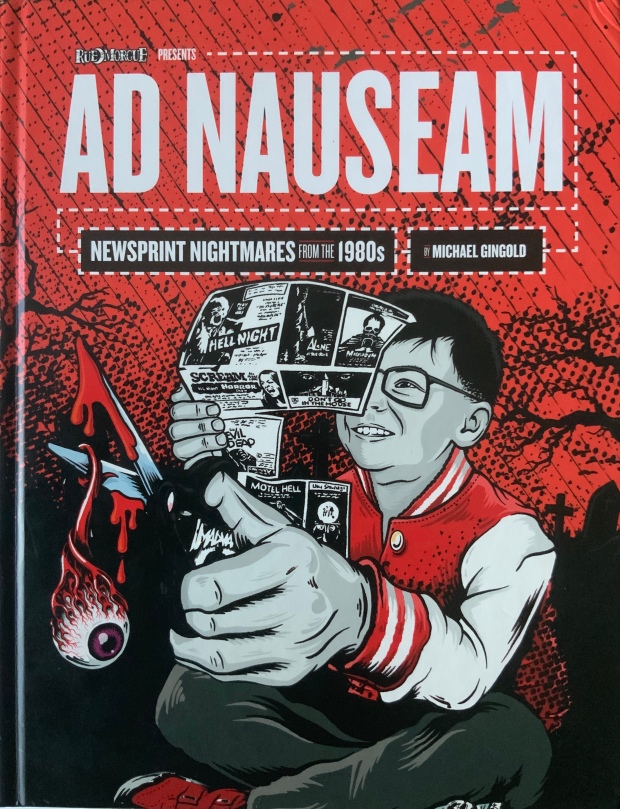 Book: I think I’ve always hoarded… I mean, ‘collected’ horror stuff. As a kid in the 70s I had toys and collected Famous Monsters Of Filmland, which graduated into Fangoria (and its many competitors like Samhain, Horrorfan, Fear and their ilk) and towards the end of that decade, VHS tapes, which became DVD and Bluray, and video games, and records, and comics…

…gawd, my collecting is exhausting!

One thing that is always nice to see though is that there is others like you and it would appear that Michael Gingold is cast of a similar die to me. Gingold is a well known staple of the horror movie fandom, being a former editor in chief of the aforementioned Fangoria, he’s written, starred in, directed and produced movies, and has written several books, such as The Frightfest Guide to Monster Movies and this book Ad Nauseam.

The basic idea of this book is to show the reader the newspaper advertisements for horror movies of the 80s, but I’ll come back to that. The source of these clippings is a young Gingold’s obsession with cutting adverts from newspapers and collecting them, a story he tells in the book’s Introduction, and I admit to understanding that completely because as a kid I collected every single Star Wars clip from the newspapers so I could scrapbook my own Star Wars comics. Gingold’s obsession has resulted in a beautiful book documenting, quite specifically, the advertising campaigns used in New York City, and some other places when the newspaper strike occurred, for horror films during the 80s.

After an introduction by Gingold, the book is broken down year-by-year with an amazing collection of amazing ads, and a sidebar which introduces the films the ads represent, and a selection of some scathing and sometimes witty reviews from the ‘film review’ section of those papers.

I really need to up my nastiness game in movie reviews to match the levels that these people reach! They are most certainly, the Super Saiyan’s of bitchiness!

The final part of this book is a section called ‘The Art of the Sell’ which features and interview with Terry Levene, the president of genre movie based distributor Aquarius Releasing, the man who spearheaded so many of the genre films presented in this book’s advertising campaigns, including art, tag lines and even the subtlety of changing European director’ s names from this like ‘Lucio Fulci’ to an easier to digest (for the perhaps more prejudiced times of the 80s) ‘Louis Fuller’.

This gentlemen seems to be like a Roger Corman styled version of an advertising executive, and much like Roger Colman’s ‘boobs are the best special effects, Levene claims ‘ you’ve got to have blood, action, gore and above all, women!’

I honestly, as a massive fan of 80s horror, can’t express just how amazing and interesting this book is, though I must say that the subject matter being ‘New York City newspaper advertisements of the horror films of the 80s’, which is an incredibly small focus and probably not entirely for everyone. Rue Morgue magazine has presented the book beautifully and it was presented in a manner which was perfect on the eye.