Film: Vegemite and I have an interesting relationship. There are some days when I just can’t get enough of it, but on other days I think it is just the most revolting food ever. To me, it seems that that is an interesting look at just how taste can constantly change.

To write this review, I have watched The Innkeepers more than any other film that I have ever reviewed. Why? Well like Vegemite, every time I watch it, I have a different opinion of it. Sometimes I like it, and sometimes it’s like watching Big Brother: just a few people wandering around talking and doing stuff.

The Innkeepers tells of the last opening weekend of a hotel called the Yankee Pedlar Inn and the people that work there, Claire (played by a totally surprising and against type Sara Paxton) and Luke (Pat Healy). Luke runs a website about the Inn, and the apparent haunting that infects it, which Claire, who plays along with his investigations, has totally bought into. On this final weekend though, they have a few strange happenings, and as the weekend goes on, especially after the suicide of one of the guests, Claire becomes more and more uneasy. Actually borderline hysterical.

And then, the ‘terror’ begins….

Director Ti West has crafted a visually stunning film. He captures the quaintness of the Yankee Pedlar Inn, which is a real Inn I might point out, and creates tension throughout the entire film using all the usual horror tricks like sudden scares and low bass audio to produce that feeling of anxiety in the viewers chest, but he stops it just in time so the scare is even more jumpy!

West’s ability to inspire some great performances from the actors is notable as well. Sara Paxton, who normally plays the beautiful mean girl in films like Sydney White (yeah, I watch stuff other than horror and sci fi) or bland shark bait in Shark Night, plays this role with natural dorkiness ,and has even geeked herself up visually to complete the picture. It’s hard to believe she has played bitches in some other films she is so in tune with this dorky character. Pay Healy is also excellent, playing the computer nerd with such aplomb that I almost believe he must either be the greatest actor in the world, or he is really like his character. There are also some amazing performances from the unrecognisable from Top Gun Kelly McGillis and George Riddle along with a brief appearance from Sesame Street’s Alison Bartlett, whom I only mention as I have always had somewhat of a thing for her.

Fans of horror films and of haunted house films might find The Innkeepers a little on the lame side though, as it feels for the longest time like nothing happens. And it doesn’t. People who like films such as Ghost World or Art School Confidential will probably love The Innkeepers as it is one of those films that is more character driven than story driven, which to me seems to also be its failing, and this is where my dissatisfaction lies.

Whilst I completely enjoy the performances and the dialogue the actually story itself just doesn’t wash. The whole time I watched this film, I felt like I was watching a well acted and scripted final episode of a soap opera.

To me, this film is cinematic Vegemite. I wanted to like The Innkeepers, but it just hovered around mediocrity without doing a whole lot to actually entertain the viewer.It is well scripted, but at times it just feels like you are wandering around with no clear destination, and it’s just a disappointment. 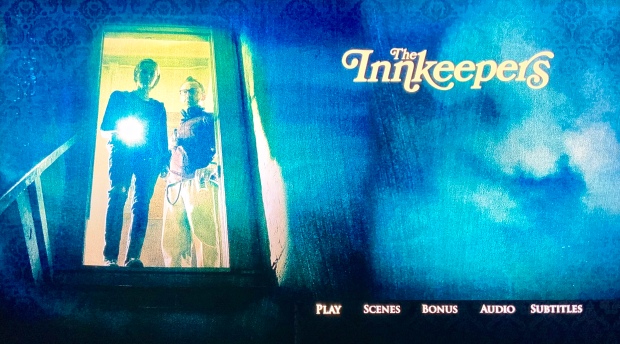 Format: Accent’s disc features a pristine and very natural looking 2.40:1 transfer. Like the image, the DTS HD Master Audio 5.1 track is exceptional, using all available channels to subtly produce a feeling of unease on occasions.

Extras: The disc opens with trailers for other Accent releases including Norman, Absentia, Forks Over Knives and Chasing Madoff, and one for this film, The Innkeepers.

The Innkeepers: Behind the Scenes is a fluff piece that tells an abbreviated version of the commentary information, which is the better option if you are interested in that sort of thing.

There are two commentaries, one with writer/ director/ editor Ti West, Producer Peter Phok and Larry Fessenden and 2nd Unit Director/ sound designer Graham Reznik, while the other features West and stars Sara Paxton and Pat Healy.The first commentary is an interest one that focuses on the making on the film, whereas the second one wis funny, but features people who are a tad conceited… typical actors.