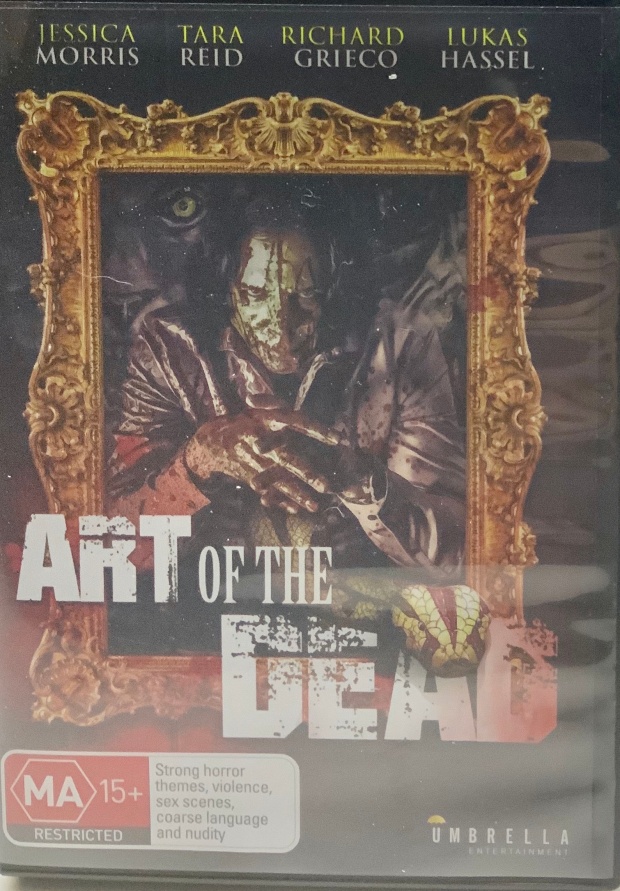 Film: The most exciting thing about having a website like the To Watch Pile is the opportunity to see films previously unseen, and an opportunity for new fandom to grow. Getting to see debut efforts by young filmmakers or missing films from favourite directors is always a treat and a pleasure.

Today I was ‘lucky’ enough to watch a film called Art of the Dead, and by ‘lucky’ I mean ‘unfortunate’ as it was quite terrible. Actually that’s unfair, the story was full of fairly obvious tropes. It could have been entertaining if it had better actors, or maybe a more competent director who could have gotten better performances from the cast. I don’t blame him though, I blame myself. Basically, when I saw the two lead performers in this film were Richard Grieco and Tara Reid, I should have known what was coming.

Art of the Dead was written and directed by Rolfe Kanesky, who was responsible for The Black Room and The Hazing, as well as many other films that have become labelled ‘cult films’. Honestly, and I mean no disrespect, but I hadn’t heard of him before but after looking at his impressively long filmography I realised I had seen and enjoyed some of his previous offerings.

This was not one of them.

Art of the Dead tells of a series of seven paintings that, through their depictions of various animals, represent the 7 deadly sins, the problem with them though is that they are cursed and the observers can become possessed by the sin it depicts.

The paintings had been separated for a long time until art collector Douglas Winter (Grieco) managed to gather them together… and promptly kill his entire family in various horrible ways before killing himself.

As his estate is sold off, the paintings are sold through an art house run by Tess Barryman (Tara Reid) who sells them as a collection only to businessman Dylan Wilson (Lukas Hassel) who distributes them throughout his home, with each painting affecting the members differently.

The frog painting in his office makes him overcome with greed, whilst the other paintings cause his wife, Gina (Jessica Morris) to be driven mad with lust (and get laid by a goat) and his kids, Donna (Cynthia Aileen Strahan) to succumb to her painting of a snake, representing insane jealousy, and Louis (Zachary Chyz) who Lion painting makes him feel all the feelings of Wrath, much to the horror of his girlfriend, Kim (Alex Reinhart).

There is two other kids who get turned into snails. Also, the artist who died years, Dorian Wilde (Danny Tesla) also seems to be floating around influencing stuff as well. It’s complicated.

Luckily for the family, though, there is a champion who is trying to destroy the paintings, Father Gregory (Robert Donovan), but will he be in time to save Kim and her boyfriends descent into madness?

As I have already said, somewhere amongst the horrible acting and Bold and the Beautiful styled casting (seriously, the BEST looking street hookers you will EVER see are in this film) there is probably an ok film, but the performances of some of the acting are sub-par by any standard… even that of sub-par.

Format: This film was reviewed with the Umbrella Entertainment release DVD which runs for approximately 97 minutes and is presented in a great 2.35:1 image with a matching 5.1 audio.