One from the re-watch pile…

Film: If you’ve been reading this blog for the last few years, or read my reviews over the past 10 years, or even listened to my podcast, you may notice two things that I say over and over again.

1. My favourite movies mostly come from the 1980s

The weird thing about these to things is that they do intersect: I really like all of the Stephen King novel based movies. It’s true. I’m a fan of the man’s ideas, but not of his execution. Do I feel bad about it? No. Would I watch any film based on a Stephen King novel at any time of the night or day? Yes.

I know that this wasn’t the first King translation I ever saw because I KNOW that I was taken to the cinemas to see The Shining by my parents at the ripe old age of 10 which launched both my fear of fathers and my love of breasts. This film, 1984’s Stephen King’s Children of the Corn (yes, that’s the official title) must have been very close to being the next one. I was watching a lot of horror in the early eighties so realistically it could have been this, or Cujo, or Carrie, but I can’t be sure. 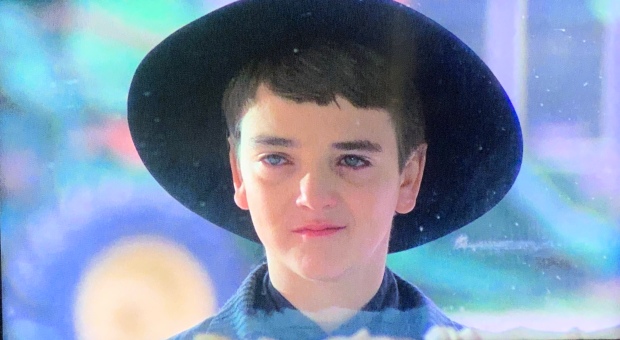 What I can be sure of was that I definitely saw it when it first came out on VHS in Australia, and it probably made me a fan of the ‘abandoned town’ as a setting for horror films!

Anyway, the story of Stephen King’s Children of the Corn (SKCotC) begins with a mass murder in a small diner of all of the adults by the children of the town. One boy witnesses it and chooses to make an attempt to escape the town which is now being controlled by teenage religious zealots, led by Issac (John Franklin) and his thuggish sidekick Malachai (Courtney Gains).

Tragically he doesn’t escape, but he does make it to a highway where young lovers, Burt (Peter Horton) and Vicky (Linda Hamilton) come across his body, and this leads them to the town where they are terrorised by the children, and threatened to be sacrificed to something called ‘He Who Walks Behind The Rows’.

Will Burt and Vicky escape, or will they be sacrificed to… well, whatever ‘IT’ is…

This is as eighties as a film can get, but it has some amazing ideas and some truly threatening scenes. I remember when I first saw it I was reminded on the classic Star Trek series episode ‘Miri’ but that was probably just a teenage me associated two cool things together.

King’s story here was adapted by George Goldsmith (Blue Monkey) and its a solid thriller made real by the direction from Fritz Kiersch which visually tells of the desolation of remoteness of farmland and their communities, and just how easily one could drop off the map if not tended to appropriately. It’s also a fascinating look at the manipulation of religion by its leaders.

Format: This film was reviewed with the 88 Films Slasher Collection Bluray, which was presented in 1.78:1 and with a DTS-HD Master Audio 5.1 audio track, both of which were surprisingly good considering the age of the film.

Extras: There’s a couple of extras on this disc:

The original trailer for the title film, plus trailers for Don’t Go In The Woods, Hollywood Chainsaw Hookers, Live Like A Cop Die Like A Man, Mother’s Day, Slaughterhouse, Trancers and Splatter University.

The Life, Legacy and Legend of Donald P. Borchers is a fairly thorough, 90-odd minute documentary about the movie producer, Donald P. Borchers, who produced this film as well as Vamp, Tuff Turf and Angel. It’s really an interesting insight into the Hollywood machine as well as Borcher’s actual career.

WISIA: Its a Stephen King classic and demands to be watched more than once.