Film: I am an unabashed Quentin Tarantino fan. Not just of his movies, but also of a gift he gave to me, and that gift was that he introduced me to a whole pile of genres of films I probably would never have watched if not for him either riffing on them in his films, or talking about them in one of his hundreds of interviews. I mean, I thought I loved film before Tarantino, but he opened me up to so many more, and I reckon I’m not the only one, and that a whole pile of Eurotrash film distribution companies owe their entire existence to the fact that did just that. I’ll just point out that I’d seen some of those films, but not necessarily realised that they were anything outside of being ‘action’ or ‘horror’.

One of the beautiful thing about Tarantino is that he doesn’t hide that love either. So many of his films either name drop, are influenced by or flat out emulate other films that you really can’t watch one of his films without stopping and thinking ‘ I now need to check out *insert name here’.

Like his ‘remake’ of Enzo G. Casteralli’s, Inglorious Bastards, One Upon A Time… In Hollywood considers itself an alternate history of actual events, tweaked ever so slightly to make the result shocking, and fun.

In this film, it is 1969, and former star Rick Dalton (Leonardo DiCaprio), is finding it difficult to maintain his stardom in Hollywood, which is a machine chews up and spits out actors as quick as it can.

Rick maintains his Hollywood lifestyle as much as he can, and has his former stunt double Cliff Booth (Brad Pitt), a man who was once accused of killing his wife, in his employ, and it’s an employment of convenience in so much as that Cliff drives and does odd jobs for Rick, but realistically he’s just being paid to continue their friendship. Rick lives in a beautiful part of the Hollywood Hills, and right next to the newly married Roman Polanski (Rafal Zawierucha) and his wife Sharon Tate (Margot Robbie).

In a chance meeting with Marvin Schwarzs (Al Pacino), Rick all of the sudden has a crisis of confidence as Schwarzs explains to him that stars start to fall when they end up as the ‘heavies’ in TV shows. He offers him an opportunity in Italy, which Rick turns down, not wanting to appear in Italian films.

Whilst Rick is working on various jobs, Cliff has a few small adventures himself, including meeting Pussycat (Margaret Qualley), a member of the Manson Family, of whom their leader has been skulking around the Polanski residence. He takes her ‘home’ to former Hollywood backlot ‘Spahn’s Ranch’, only to find the Family have completely taken over, and have owner George (Bruce Dern) not as a prisoner, but certainly, due to his being blind, stuck.

Of course, all these events eventually ties together, as one night, four of the Manson Family, Tex (Austin Butler), Sadie (Mikey Madison), Katie (Madison Beaty) and Flower Child (Maya Hawke) go to murder the occupants of the Polanski household… but perhaps redemption is in the cards for Rick and Cliff?

For the most part liked this movie, but as two separate entities. The story of a has-been actor finding himself at a loose end and maybe having to go to Italy to continue his career fascinating, and would have been compelling by itself, but I reckon that you could comfortably excise every single bit of the Sharon Tate/ Manson plot and still have an interesting about the Hollywood machine.

Now that’s not to say I didn’t enjoy Robbie’s performance, no quite the contrary, but I feel that the film suffered from her subplot which seems like it solely existed to have the violent outcome at the end of the film. Even the stuff with Cliff meeting the Manson Family didn’t really need to be in their except to feed the last 15 minutes… mind you, his torture of the man he was ‘convincing’ to repair his car was an interesting reflection into his psyche, and that the rumours about him and his wife’s death may not have been unfounded.

In actual fact, all the casting was fabulous. So many faces appear in this film that I didn’t expect to see: Zoe Bell, Kurt Russell, Rebecca Gayheart, Danielle Harris, Harley Quinn Smith, Lena Durham, Michael Madisen, Timothy Olyphant, Luke Perry… I could go on! In researching the film for this very interview I have discovered that I now have to watch it again as I did even realise some of the actors were who they were!

The filming is just gorgeous as well. Tarantino’s eye is on point as usual as the camera’s seating is always totally within the film. Of course, ladies feet feature prominently, and I have to say that no one has ever filmed Robbie’s natural beauty so well.

As usual, the soundtrack is magnificent, but knew would expect no less from a Tarantino film. Also, the script itself is amazing. At no time do I find myself in any way bored by what the cast are saying. All in all, except for the weird disjointed storyline that I found distracting, I did actually like this film, but it’s not going to be a regular rewatcher for me, like Inglourious Basterds, Death Proof or Pulp Fiction are.

Format: This review was done with the Bluray of the film and looks and sounds awesome! The vision is is 2.39:1 and the audio is in DTS-HD MD 5.1.

Extras: There’s a few decent extras on this disc but alas, I must also make a boast about my copy of this disc. 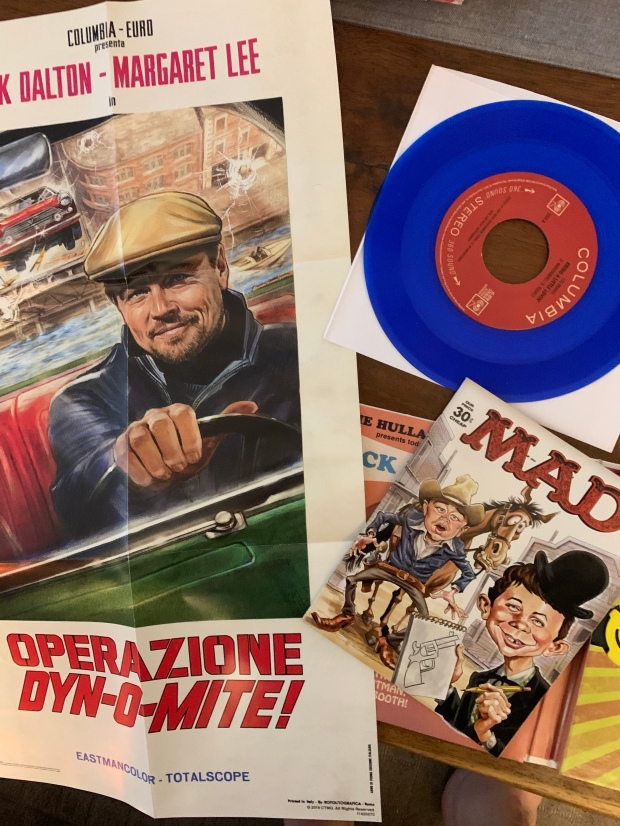 I was lucky enough to manage to get my hands on this brilliant 4K edition (even though I have reviewed the Blu-ray Disc that also comes in this package as I don’t yet have a 4K player) that feels like it is just made for Tarantino fans. Not only does this disc sport a bunch of extras (reviews to follow), it also has a cool bunch of ‘relics’ from this history that doesn’t exist.

This package contains a poster of one of the ‘Italian’ films that never existed, a Mad Magazine that parodies one of Rick’s films, and a single, on blue vinyl

The extras on the disc are pretty cool.

Surprisingly, there are a bunch of deleted scenes, which I am grateful were excused from the film. Honestly, and other 20 to 30 minutes worth could have gone too!

Quentin Tarantino’s Love Letter to Hollywood is a fascinating look at why Tarantino picked 1969 to set this film, which surprisingly was not JUST because of the Manson Murders.

Restoring Hollywood – the Production Design of Once Upon a Time… In Hollywood, and The Fashion of 1969 both talk about the film getting the look of the year correct, both from a scenery point of view, and the fashions as well.

These extras were all really cool, but I can help but wish they were longer.

WISIA: As I said earlier, I like the film, but it doesn’t get the rewatching score that other films of his do.