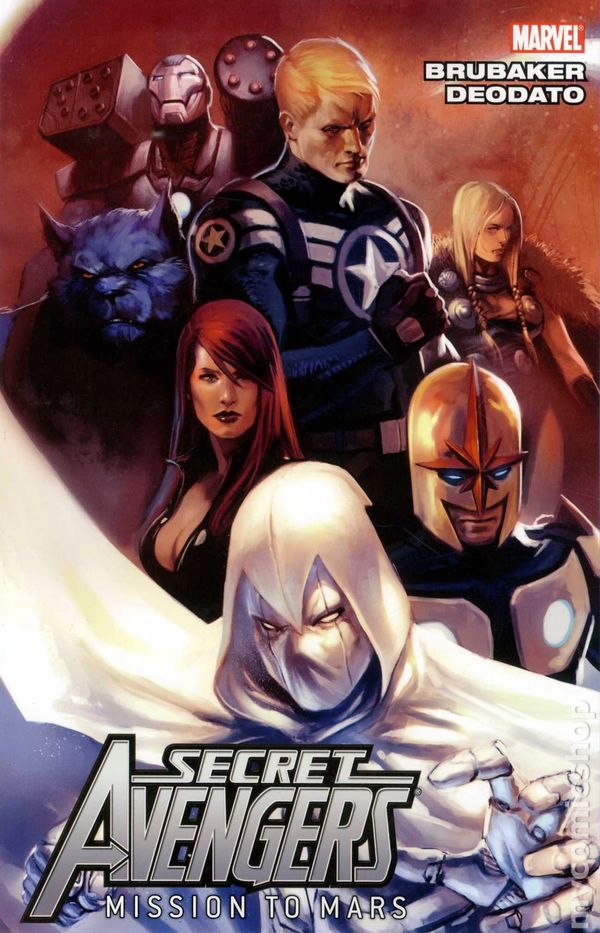 This collection combines the first five issues of Secret Avengers, which is an undercover, covert Avengers group. This comic took place right after the amazing Death of Captain America storyline which really shook up the Marvel status quo, as we now had the Winter Soldier as Captain America, and Steve Rogers (Cap’s alter ego) left without that role.

The newly christened ‘The Captain’ in charge of the aforementioned group, which confusingly consisted of Black Widow, the Beast, War Machine, Nova, Valkyrie, Ant-man (not Hank, and not Scott but some other guy) and Moon Night.

In this story, the Secret Avengers find themselves on a … yep, Mission to Mars… in pursuit of the Serpent Crown, a powerful icon that would be deadly in the wrong hands. Unfortunately, something called The Shadow Council is also in pursuit, the weird thing is though, is the guy in charge looks like a certain Nick Fury… and what happens when one of the members of the Avengers turns against them…

This was written by Ed Brubaker, who wrote the Death of Cap storyline and is an amazing writer, but it seems that this comic was a massive misstep. Moon Knight and Black Widow are completely wasted and by sticking them on Mars, are outclassed., and the new Ant-man is, well, a jerk.

The art of issues 1 to 4 is by Mike Deodato Jr , and this is an artist who just gets better every time I see his work. If you look back at his early art, he seemed little more than a post-Image comics stooge whos talent lay in his ability to emulate them, with his art looking like the unwanted child of a marriage between Jim Lee and Rob Liefeld’s early work, but now it’s leaning towards the great John Buscema.

The fifth issue has art by David Aja, who is a spectacular artist who worked on the fantastic Hawkeye: My Life As A Weapon with support from Michael Lark and Stefano Gaudiano.

The reviewed copy of this comic is a really nice hardcover volume from Marvel, which in addition to the five issues has a bunch of alternate covers.

Visually this story is a treat but the mix of characters is like eating chocolate and fried cheese: by themselves nice, but together, just wrong, and the story suffers for it.

Got a new toy today, see my excitement!