Film: In addition to horror films I have always been a fan of the heroic figure, and I mean properly heroes, not the dark, brooding murderous ‘super heroes’ of today. My heroes were always the ones a bit more honest: yeah, I lean towards the Superman rather than the Batman camp and I’ll take #teamcap over #teamironman any day of the week.

One of my first non-comic experiences with this type of hero was with the pulp styled heroes. Saturday afternoon television, when I was young, consisted of Tarzan movies or TV shows, Godzilla movies and Universal horror and comedy pics, and Tarzan really spoke to the boy who craved adventure in me, which I guess was the reason the character became popular in the first place.

This of course led me to read the novels and stories of Edgar Rice Burroughs, where I really enjoyed both the tales of Tarzan and those of John Carter of Mars too. By extension I drifted into Conan stories, and the works of H.G. Wells and Jules Verne’s, and then after I saw the film Re-animator, H. P. Lovecraft as well…. I guess I circled around and drifted back to horror pulps in the end.

For those who don’t know, Tarzan is the story of the son of John Clayton II and his wife, Alice, the Lord and Lady of Greystoke, who are shipwrecked in Africa in around 1888, and is born whilst they are lost. When Tarzan is one year old, Alice dies and his father is murdered by the King of the Apes, Kerchak.

The baby is adopted by the gentle female ape Kala, and Tarzan, whose name means ‘white skin’ in Ape-speak, quickly becomes a member of the ape family. He does eventually happen upon his human parent’s cabin and realises there is a reason why he is so different from his adopted family. He kills Kerchak, who is jealous of his skills, and goes on a series of adventures across many novels, meeting the lovely Jane Porter and many other characters both friend and foe and this documentary celebrates the books to a small scale, and how clever Edgar Rice Burroughs was at marketing him, but really explores the cinematic history of the character.

It’s information is always fascinating and it interviews not just directors like David Yates and Hugh Hudson, actors like Casper Van Dien, Christopher Lambert, and Wolf Larson, (and Ron Ely and Johnny Weissmuller in archival interviews) who are all identified by what ‘number’ Tarzan they are, Mike Richardson from Dark Horse Comics, but also several Tarzan, film and social historians to add context to the character.

There is a couple of glaring holes in this documentary though. The animated Tarzan film from Disney doesn’t get looked at which I originally thought was because maybe Disney didn’t wish to be involved in the film, but footage from Disney’s John Carter film is mentioned and seen.

Another important section of his history was the Filmation animated series from the 70s, which started as Tarzan, Lord of the Jungle and evolved into The Batman/ Tarzan Adventure Hour and then Tarzan and the Super 7. In addition to Ron Eli’s TV series this cartoon was another important step into my affection for the character.

The final one I thought was an obvious absence was the comic series’s from both Marvel and DC Comics, not to mention from Dark Horse, Dynamite, Dell and several other comics companies. Yes, they do show a few covers but they are revealed more as a product like a toy, rather than a storytelling device. This is made particularly obvious by the fact the documentary does extensively discuss Tarzan in art, and the newspaper comic strip made by comics legends Hal Foster and Burne Hogarth.

Whilst not a complete look at the character, which would probably be in a much longer documentary, this is a really nice overview of Tarzan’s importance to cinematic history, …. I don’t think any other character can claim to have a new film out every 14 months between 1917 and 1970! It’s really a shame that he’s not a relevant anymore, which is probably due to how small the world has gotten, and how the deepest darkest Congo maybe doesn’t have the mysteries it may have once contained. 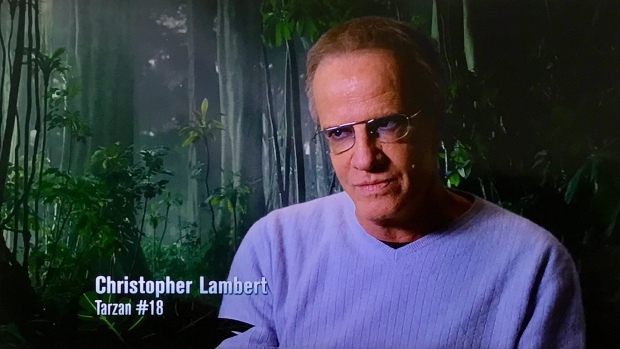 Format: The film was reviewed on the Umbrella Entertainment, multi-region DVD which runs for approximately 76 minutes. Due to it containing a lot of archival movie footage, the 1.77:1 image is of various degrees of quality, and the spect ration changes at times, though generally a border in placed on either side of the screen. The audio is presented in a clear Dolby 2.0 track.

Extras: None at all.

WISIA: Being a Tarzan fan, I have only had this a week and have already watched it several times. It’s fascinating.