One from the to watch pile…
Rabid 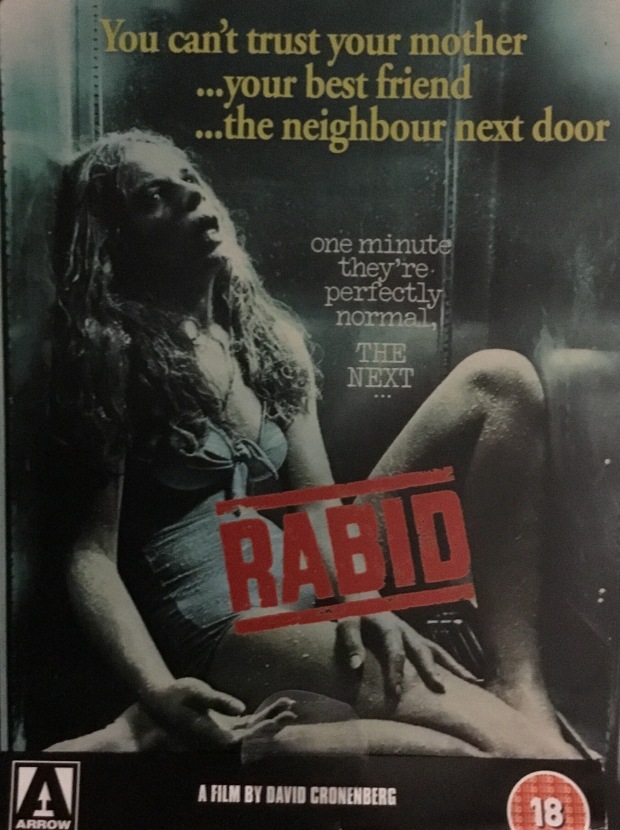 Film: Do I think of myself as a fan of the director David Cronenberg? Well, to be honest, I didn’t! Whenever a conversation leads into to Cronenberg territory, the film Videodrome always pops up… And THAT film I am not a fan of, but in the last week or two I have been rewatching some films of his that aren’t Videodrome. These films were eXistenZ, which Cronenberg says it is a reaction to Salman Rushdies’ persecution, his remake of The Fly, which is just amazing, and Naked Lunch, which, whilst it has its problems, I find an intriguing watch. During this rewatch frenzy, fellow To Watch Pile-r Simon (check out his action movie blog explosiveaction.com ) offered me his copies of earlier Cronenberg films, Shivers and Rabid, neither of which I have ever seen. I’m not sure how either passed me by, especially seeing as how I can remember seeing the trailer for Rabid on many films hired on VHS during the 80s.

I thought the pixie-ish Lynn Lowrey’s appearance in Shivers couldn’t be topped: I was wrong. 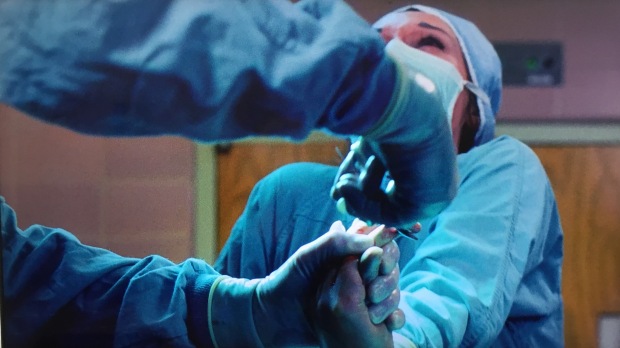 Rabid tells the story of Hart (Frank Moore) and his girlfriend Rose (Marilyn Chambers) who are involved in a terrible motorcycle accident which sees Hart with a few superficial wounds, but has Rose severely injured after being stuck under the burning motorcycle.

He wounds are quite catastrophic and she is picked up your the ambulance associated with the local plastic surgery clinic run by Doctor Keloid (Howard Ryshpan), who is an innovator of a type of surgery which involved the manipulation of human tissue so it can be used to assimilate any tissue it may be combined with.

Unfortunately for Rose, it does some thing else to her. She becomes a vampire, of sorts, who doesn’t turn her prey into vampires, but instead infects them with a form of rabies, which there can then spread through their bite. 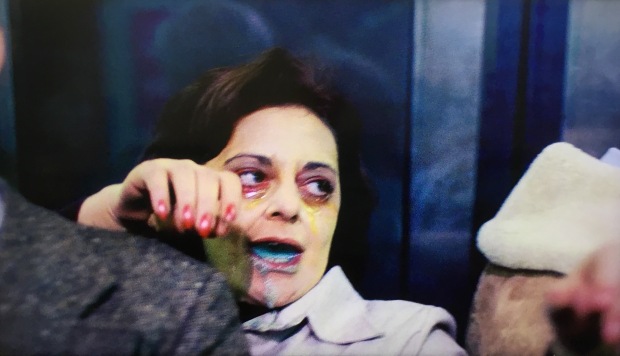 Simply, this movie is amazing. It is thematically similar to Shivers in its story of a spreading virus, but it is different enough for that not to even matter. All of Cronenberg’s themes of change and bodily transformation are present and clearly in embryo.

The film is well performed by all the actors, and it clearly has a higher budget then that of Shivers. Special effects and make up legend Joe Blasco had his work cut out for him with the effects in this film, and Rose’s vampiric ways are nothing short of disturbing!

This is definitely a must see, and it will certainly change your opinion of the originality of a lot of the post millennial pandemic films and zombie virus films we have seen since.

Format: As I stated earlier, I was lucky enough to get this film as one of the UK’s Arrow Video’s bluray steelbooks, which of course means it is Region 2. The feature runs for 91 minutes, and is presented in a 1.78:1 aspect ratio, with a mono audio. At first I didn’t appreciate just how excellent the image is, until I watched the trailer, an extra on this disc, and saw just how well it had been cleaned up in comparison

This disc has a bunch of pretty cool extras.

Two different commentaries, one with Cronenberg, which he articulates every aspect of the film production and one with William Beard, author of The Artist As Monster: The Films of David Cronenberg. This second commentary explores not just this film, but many of Cronenberg’s work. Beard clearly has a deep and thorough understanding of Cronenberg.

Four interviews with Cronenberg, producer Ivan Reitman, co-producer Don Carmody and special effects artist Joe Blasco. These interviews are all fascinating a really present an interesting picture of how the film was made though for my liking, Blasco’s was a little short.

There are two documentaries: The Directors: David Cronenberg is a 60 minute episode of a series from 1999 that focused on various directors and their processes and people who worked for them. Obviously this one focuses on Cronenberg and interviews the man himself, and Holly Hunter, Peter Weller, Marilyn Chambers, Michael Ironside and others, and is a full exploration of his career up to eXistenZ. Raw, Rough and Rabid takes a look at the production Canadian company Cinepix, who released Rabid and is a fascinating look at the Canadian film business of the time.

The trailer is also one here as a special feature, and you don’t realise just how beautiful the film looks until you see just how ordinary is the video quality of the trailer. There is also a promotional gallery of various materials used to advertise the film.

This set also features a DVD presentation of the film, in standard definition as opposed to the bluray’s 1080p and a booklet containing several articles: Plastic Surgery Disaster: Rabid, The October Crisis and the Pathological Body Politic by Kier-La Janisse, A Biologically Correct Vampiress by David Cronenberg and An Interview With Marilyn Chambers by Calum Waddell, not to mention the films credits and several notes about the transfer. These are all interesting and essential reads for the Cronenberg fan. 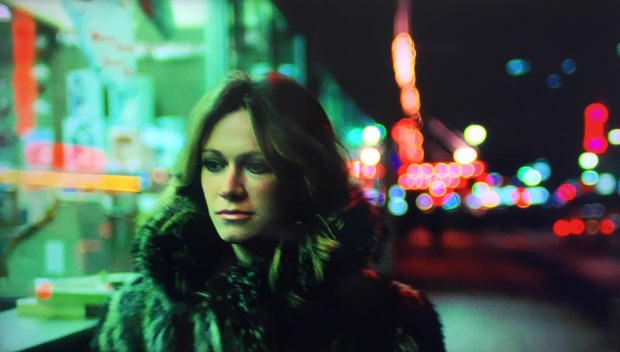 WISIA: A resounding ‘Hell yeah’ from this lowly critic on the rewatchability of this pic. I just finished writing this review and I am thinking about watching it again now!