Happy Australia Day, everyone! Have a great day, enjoy your celebrations, but beware of … the Red Billabong!! One from the to watch pile…
Red Billabong (2016)

Film: Wouldn’t it be great if the days of Ozploitation returned. As a teen I saw many of the films talked about in the amazing documentary Not Quite Hollywood, but I wasn’t actually aware of how it all came about until that very documentary, and since then I have used it as somewhat of a shopping list of Australian horror and exploitation.

If I could get my hands on a copy of Lady, Stay Dead I’d be absolutely stoked!

The other thing that doco did was, though, was make me a little less critical of our own industry and really take notice of Australian genre films, and every few years, when a new one might come out, I’ll give it a go.

This film was written and directed by Luke Sparke, who previous to this had only produced the doco/ biopic of Australian families during various world wars, Yesterday is History, which after watching this, I might actually seek out as I thoroughly enjoyed this film!

Red Billabong: Tim Pocock and Dan Ewing wonder if they are Home or Away.

Nick (Dan Ewing) Reuter said to the country on request of his brother Tristan (Tim Pocock) to make some decisions about the property bequeathed by their grandfather their (Col Elliot). Nick meets up with Tristan’s friends, a bunch of lowlife drug dealers led by BJ (played hilariously by Ben Chisholm) whose girlfriend Anya (Sophie Don) is Nick’s ex.

Unfortunately for them, something strange is happening on the farm, and an ancient creature of Aboriginal legend has risen, but is the creature the worst of their problems, or is a collection of family deceits about to blow up in their faces, and what does American property developer Mr Richards (Felix Williamson) really want with the farm?

OK, so some of the cast is taken from shows like Home and Away and A Place To Call Home, but don’t let that drive you away from an Australian horror film that is ABOUT Australia and it’s native peoples mythology. You know it’s an Australian film when it opens with Gang Gajang, and then proceeds to include The Angels, Darryl Braithwaite and others on the soundtrack… though it was weird to see a ‘proper’ cigarette packet instead of those awful, useless Olive Drab ones we have now.

The movie is shot really nicely too, and really shows of just how beautiful the Australian rural life can be, though the Billabong never actually gets ‘red’. The inclusion of Gregory J. Fryer as the Aboriginal elder who seems to know what’s going on is cool too: this doesn’t have a bunch of kids work out the local legends and fight the evil, instead a native local helps to combat it with knowledge, plus a spear, boomerang and didgeridoo!

The only issue with this film is the monster itself. I think it’s great to use the bunyip as the east, but the design of the monster is pretty crap, and then it is realised quite badly in some terrible CGI, and if I had been the director and seen how bad it was, I possibly wouldn’t have given it as much exposure as it gets, which is far too much.

So do we have a new Ozploitation film? Maybe, as it shows off the country and legends, uses local talent, including an Australian putting on an American accent, has a little sex (no nudity though), some nice bikini bits and a whole bunch of strine that for me wasn’t a chore to listen too, but instead made for a bit of amusing self-depreciating humour. A decent Australian monster movie, steeped in Aboriginal mythology with an unfortunately badly designed and realised CGI monster. Roger Corman made a career of making good movies with crappy monsters so why not give this one a go! 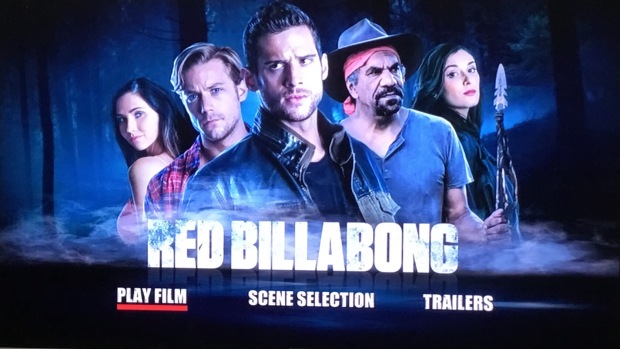 Format: The reviewed copy of this film was the Australian DVD which runs for 108 minutes no os presented in a good 2.35:1 anamorphic widescreen image with an excellent Dolby Digital 5.1 audio.

Extras: Only trailers for Red Billabong (which shows far too much of the monster for my liking), The Trust and Good Kids.

WISIA: Except for the dodgy CGI bunyip, this was pretty good, so yeah, I’ll watch it again.