Film: When it comes to cinema, gems are hard to find, but now and again you’ll find yourself sitting in front of a film thinking to yourself ” why the Hell have I never seen this?”

Honestly, I had never even heard of this film, but one of the many movie magazines I buy did a blurb on it a few years ago, and I thought I should hunt it out, but other, seemingly more important releases always overshadowed it. This was a mistake, as I can’t even remember what some of those other films may have been. I should have immediately grabbed Mystics in Bali the very second I heard of it!

Mystics in Bali tells of curious tourist Cathy Kean (played by German tourist Ilona Agathe Bastian, who had no acting experience but did the film so she could stay in Bali longer) who wishes to learn the magical ways of the Leyak, an Indonesian black art. Her friend, and potential lover Mahendra (Yos Santo) takes her deep into the jungle to meet a cackling old Leyak witch (Sophia WD) who takes Cathy under her wing as an apprentice. She starts by learning a few spells but soon discovers that once you are under the thrall of a Leyak, it is difficult to get out. Maybe even impossible, even with the assistance of local shamen and mystics!

Mystics in Bali is one of those ‘kitchen sink’ films: you know, as in it has everything but! Witches (well, Leyaks), metamorphosis, floppy titted pig women, ancient mystical masters, flying vampire heads, people vomiting live mice, awkward romance and most incredulous of them all, a baby eaten right out of a pregnant woman’s… um… punani.

Now don’t tell me you didn’t want all that in one film.

The film does suffer from some poor dubbing, but considering the female lead was a German tourist and the rest of the cast are Indonesian, I guess one can overlook that.

The special effects aren’t so special, but are a treat to watch as there are some spectacularly bad animation effects, lightning from fingers and such, that look like hand drawn animation on the original film cels. The metamorphosis scenes do their very best to be American Werewolf in London, and fail, but are actually still quite off putting.

If you don’t have Mystics in Bali in your collection, it is an error you must immediately fix.

Format: Presented in 2.35:1 anamorphic widescreen, Mystics in Bali has a clarity that is surprising for a film of this age and region. There are occasional film artefacts, and admittedly at some of the more ‘special’ effects heavy sequences it does go slightly foggy, but I don’t think that is a problem with the transfer, but instead the original source. Presented in stereo only, but it is crisp and clear, considering it is an English overdub recorded in a studio somewhere.

Extras: We start with a fairly poor quality trailer and then get some extras that would have been great… if they weren’t text and had instead been actual documentaries. They are Mystics in Bali and the Indonesian Exploitation Movie, which talks about Indonesian cinema, H. Tjut Djalil – Director Filmography, which is just that and How to Become a Leak (sic) which I am sure should have been spelt ‘Leyak’, which contains the rites to becoming a Leyak. Don’t try this at home.

WISIA: Hell yeah! This film is a hoot and a holler! 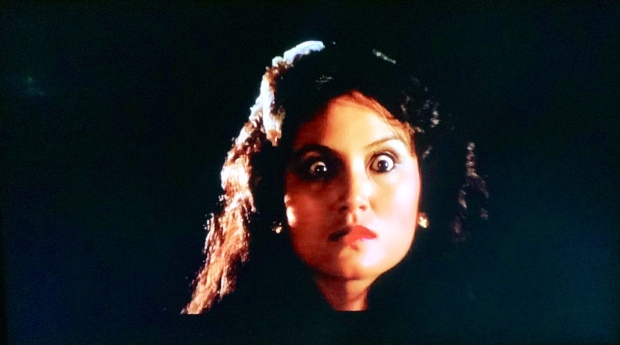