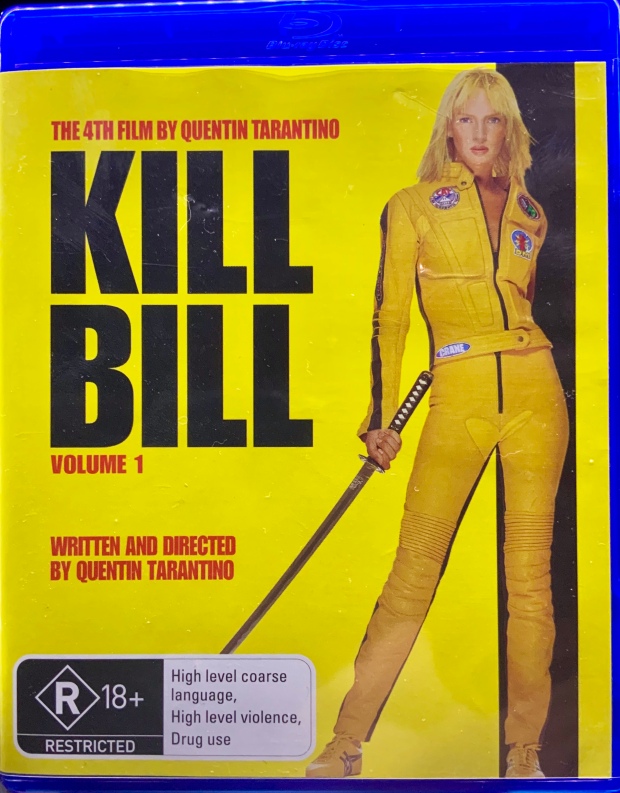 Film: Quentin Tarantino is one of those writer/ directors whose films are either loved or loathed. QT is regularly accused of plagiarism and being unoriginal on one hand, and on the other hand, he almost single handed lay brought back the popularity of some exploitation and international films into the limelight. It is unfair to call QT a plagiarist, as he freely acknowledges his influences, and ha always worn them on his sleeve. This film, Kill Bill Volume 1, was conceived during the filming of Pulp Fiction, where GT could see a potential in Uma Thurman to be a great female action lead, and decided to write an entire film around her.

As the title suggests, Kill Bill Volume 1 tells the first part of a revenge tale. ‘The Bride’ (Uma Thurman) was thought to have been murdered by a squad of killers she was once a part of, The Deadly Viper Assassin Squad, a group led by the mysterious Bill (David Carradine). She cuts a swath of violence in this film to get to her intended victims: O-ren Iishi (Lucy Lui) , Elle Driver (Darryl Hannah), Vernita Green (Vivica A. Fox), Budd (Michael Madsen), but will she get to them all? Will she survive countless battles so that she can finally Kill Bill? Mmmm…I guess you shall have to watch Volume 2.

So, what is your pleasure? Wuxia? Got it! Exploitation? Yeah, got that too. What about gangster flicks? Yep, there’s a little of that as well. We even have a little bit of anime!! Some of the dialogue in this film suffers from ‘Lucas’ Romantic Scene Disorder’, where the lines seem to have trouble coming out of the actors mouths, and feel as awkward as a contestant on Young Talent Time. Tarantino’s plotting talents however should keep you interested enough that it is only a minor bother.

As usual, QT’s supporting characters are just as interesting as the main cast, and the plot, disjointed though it may be (like Pulp Fiction), moves along at a great pace. A fan of the type of cinema QT has interests in could really spend hours with a group of like-minded friends spotting the massive amounts of nods to other films.

With influences ranging from Tobe Hooper to the Shaw Brothers, and even sometimes borrowing from his own films, Kill Bill Volume 1 could have easily been takeaway crap, but instead it is a fresh dine-in meal with all the trimming… though the dessert has been saved for a Kill Bill Volume 2.

Format: Kill Bill Volume 1 was reviewed with the Australian release Bluray, which is presented in a 2.40:1 anamorphic widescreen which is clean and perfect. The reds are SO red, the yellows are SO yellow and the black and white is… well, contrasting! This film is in Dolby 5.1 and is a kick ass track. The sounds of blood spraying and swords clanging together will ring in your lounge room long after the film has finished. There is some great use of musical cues that really make full use of the 5.1 sound stage as well.

Extras: The Making of Kill Bill should have been a three hour extravaganza where QT goes through everything that influenced this film and his career, but instead we get a 22 minute fluff piece that admittedly has a lot of interviews but ultimately leaves you unsatisfied.

There is also two trailers for Kill Bill Volume 1: a teaser trailer and a‘ bootleg’ trailer, which weirdly contains some footage from Volume 2!